MIAMI (REUTERS) –  Hurricane Irma took aim at heavily populated areas of central Florida on Monday (Sept 11) as it carved a path of destruction through the state with high winds and storm surges that left millions without power, ripped roofs off homes and flooded city streets.

Irma, once ranked as one of the most powerful hurricanes recorded in the Atlantic, came ashore on Florida on Sunday and battered towns up and down the state.

It weakened to a Category 1 hurricane, carrying maximum sustained winds of about 135km per hour by 2am local time on Monday. The storm was churning north-west in the centre of the state near the Tampa and Orlando metro areas on Monday morning, the National Hurricane Centre said.

The storm killed at least 28 people as it raged westward through the Caribbean en route to Florida, devastating several small islands, and grazing Puerto Rico, the Dominican Republic and Haiti before pummeling parts of Cuba’s north coast with 11-metre waves.

Irma was ranked a Category 5, the rare top end of the scale of hurricane intensity, for days and its ferocity as it bore down on hurricane-prone Florida prompted one of the largest evacuations in US history. Some 6.5 million people, about a third of the state’s population, had been ordered to evacuate southern Florida. Residents fled to shelters, hotels or relatives in safer areas.

On Sunday, Irma claimed its first US fatality – a man found dead in a pickup truck that had crashed into a tree in high winds in the town of Marathon, in the Florida Keys. 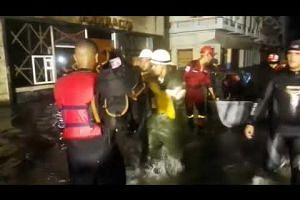 Jonathan Brubaker, 51, waited out the storm bunkered in a recently constructed house in Bradenton, on the state’s west coast south of Tampa, with hurricane shutters drawn, flashlights and candles ready.

As a radar app on his phone showed Irma passing by, he had seen little more than gusty winds. He still had power.

“I feel like we kind of dodged bullet on this one,” he said, adding that he would wait until Monday morning before trying to sleep. “And then, I think we’re OK, knock on wood.”

High winds snapped power lines and left about 4.5 million Florida homes and businesses without power in the state, whose economy represents about 5 per cent of US gross domestic product.

Irma was forecast to continue churning northward along Florida’s Gulf Coast during Monday morning, further weakening along the way before diminishing to tropical-storm status over far northern Florida or southern Georgia later in the day.

It could dump as much as 63.5cm of rain in parts of Florida and as much as 40cm in parts of Georgia, prompting flash flood and mudslide warnings, the National Hurricane Centre said.

'Pray for us': Floridians hunker down as Irma hits

Local TV news video of damage in Naples, a city on the Gulf coast about 200 km to the northwest of Miami, showed buildings ripped apart by hurricane winds and streets flooded by rain and storm surges.

The storm’s westward tilt to Florida’s Gulf Coast spared the densely populated Miami area the brunt of its wrath, although the wide reach of the hurricane meant the state’s biggest city was still battered.

Waves poured over a Miami seawall on Sunday, flooding streets waist-deep in places around Brickell Avenue, which runs a couple of blocks from the waterfront through the financial district and past foreign consulates. High-rise apartment buildings were left standing like islands in the flood.

“We feel the building swaying all the time,” restaurant owner Deme Lomas said in a phone interview from his 35th-floor apartment. “It’s like being on a ship.”

Police in Miami-Dade County said they had made 29 arrests for looting and burglary.  “We’re on patrol and won’t tolerate criminal activity as our community recovers from Hurricane Irma,” it said on its twitter.

The storm and evacuation orders caused major disruption to transportation in the state that is a major tourist hub. Thousands of flights were cancelled.

Miami International Airport, one of the busiest in the country, halted passenger flights through at least Monday and will see if it can resume those operations on Tuesday.

Irma, which was expected to cause billions of dollars in damage to the third-most-populous US state, it hit just days after the Houston area was deluged by unprecedented flooding from Hurricane Harvey, which dumped more than 127 cm  of rain in parts of Texas.

Harvey killed at least 60 people and caused an estimated US$180 billion (S$241 billion) in property damage.

US President Donald Trump, acting at the governor’s request, approved a major disaster declaration for Florida on Sunday, freeing up emergency federal aid in response to Irma, which he called “some big monster.