WASHINGTON - Iranian President Hassan Rouhani has lashed out at Donald Trump, calling him a “rogue newcomer to the world of politics” a day after the US President excoriated Iran in his debut address at the United Nations General Assembly.

“The ignorant, absurd and hateful rhetoric filled with ridiculously baseless allegations uttered yesterday was… unfit to be heard at the United Nations,” he told the General Assembly on Wednesday (Sept 20).

In his speech, Mr Trump had accused of Iran exporting terror and instability and pursuing nuclear weapons under the cover of the 2015 Iran nuclear deal. He also hinted that the US may pull out of the deal.

On Wednesday, Mr Trump said “I have decided”  when asked on the sidelines of the UN General Assembly if he had decided on the Iran deal, but he did not elaborate.

Shortly afterwards, Mr Rouhani said in his speech that Iran “ will not be the first country to violate the agreement but it will respond decisively and resolutely to its violation by any party”. 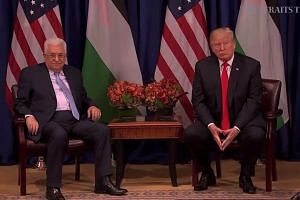 Donald Trump says he has made decision on Iran deal, declines to say what it is

The Iranian leader added: “By violating its international commitments, the new US administration only destroys its own credibility and undermines international confidence in negotiating with it or accepting its word or promise.”

Mr Rouhani noted that the deal, known formally as the 2015 Joint Comprehensive Plan of Action, was the outcome of two years of intensive multilateral negotiations and overwhelmingly applauded by the global community. It belongs to the international community and not only one or two countries, he added.

“It would be a great pity if this agreement were to be destroyed by rogue newcomers to the world of politics. The world will have lost an opportunity,” he said.

Under the agreement, signed by the US as well as the permanent members of the UN Security Council and the European Union, Iran agreed to divert its nuclear research and production to peaceful uses.

The latest assessment found that Iran has abided by the agreement.

Mr Rouhani also took a swipe at Israel, saying it was “reprehensible that the rogue Zionist regime that threatens regional and global security with its nuclear arsenal and is not committed to any international instrument or safeguard has the audacity to preach to peaceful nations”.

He later ruled out talks with Trump’s administration on the nuclear deal.

“An American government that chooses to trample on her legal and legitimate international commitments, a conversation with such a government would be a waste of time,” Rouhani told reporters on the sidelines of the UN General Assembly.