DAVOS, SWITZERLAND (NYTIMES) - No one was declaring President Donald Trump a changed man. Privately, executives and global leaders who had gathered in Davos continued to worry that the US president could yet indulge his worst instincts - and his penchant for shock on Twitter - to deliver a geopolitical crisis, open up a new front in trade hostilities or offend a vast group of people.

But a rough consensus emerged over Trump's two-day visit that his administration had shown itself to be more pragmatic than advertised. Many were inclined to view the president's most extreme positions as just aggressive bargaining postures.

"There's a very constructive mindset in the Trump administration to find the best path forward," said Vas Narasimhan, global chief of drug development for Novartis, who attended a dinner Trump hosted Thursday night with leaders of more than a dozen European companies.

"I'm optimistic that, with other world leaders, most of these issues can be tackled in a productive way for the global economy and for global businesses."

During the dinner, Trump made the rounds, stopping to ask executives how they plan to increase investment in the United States, according to attendees.

In his speech, Trump took credit for a booming US stock market and strong economic growth, pointing to the regulations his administration has slashed, as well as the US$1.5 trillion (S$1.96 trillion) package of tax cuts he championed and navigated through Congress.

He left the impression that he was above all eager to woo foreign investment, as if he were leading some amped-up US Chamber of Commerce.

'America is open for business': Trump in Davos

Economists note that the US economy is into its ninth year of expansion, a trend that speaks to how the aftermath from the 2008 financial crisis has finally run its course. A surge of cash delivered by the Federal Reserve has stimulated commercial activity.

The International Monetary Fund this week lifted its forecasts for US growth in large part because of Trump's tax cuts. Economists note that the benefits fall overwhelmingly on corporations and wealthy US households, exacerbating economic inequality.

But Trump framed the tax cuts as a broad source of what will be better days for all Americans. And he gained the unbridled endorsement from the man who heads the World Economic Forum, Klaus Schwab, whose eagerness to flatter his interlocutors is legendary.

"On behalf of the business leaders here in this room let me particularly congratulate you for the historic tax reform," Schwab said, adding that the tax cuts were "fostering job creation while providing a tremendous boost to the world economy."

Whatever the optics of the head of an institution dedicated to reducing economic inequality offering his unqualified support for Trump's tax cuts, Schwab was indeed speaking for business.

Jeffrey Rosen, deputy chairman of the financial advisory firm Lazard, said: "US tax reform makes it more economic to do business in the United States. Deregulation makes it easier. These messages appear to be resonating with CEOs of businesses outside the US"

Privately, corporate executives have continued to voice discomfort that the White House is under the control of a figure who, on any given day, can offend an entire continent of people, stoke worries of nuclear apocalypse or threaten to tear up a trade deal that is central to the global supply chain.

But many departed Davos with an enhanced sense that there might be more method to Trump's fits of pique than they assumed.

In the days before Trump's arrival, European leaders, as well as India's Prime Minister Narendra Modi, devoted speeches to mounting defenses of the global trading system in what resonated as an advance rebuttal of the US president.

Many worried that Trump's attacks on the World Trade Organisation (WTO), his threats to pull the United States out of Nafta and his frequent intonations of a trade war with China could undermine the global economic expansion.

But some European leaders suggested that Trump's bellicose rhetoric - so long as it does not seep into policy - could play a useful role in forcing countries that breach trading rules to take measures to restrain subsidies for favored industries.

US President Donald Trump talks up dollar in Davos

In a briefing with reporters Thursday, Cecilia Malmstrom, EU trade minister, expressed concerns about the Trump administration's threats of a trade war with China. But she added that Europe has its own problems with China and would welcome a chance to coordinate its response.

"There are some grave concerns on China, who are massively subsidizing state-owned companies," Malmstrom said. "And there, yes, we could work with the US."

Other European officials suggested that Trump's rhetoric might have the effect of pressuring China to roll back production of steel, alleviating a global glut that has depressed prices. It might spur China to limit subsidies for solar panels and other manufactured goods.

One senior German official noted that the president needed to be measured by his deeds, not just his words, adding that China is not the embodiment of free trade and that countries shouldn't necessary just accept what China does.

Director General of the WTO Roberto Azevêdo told reporters that he was focused on what actually emerged in the realm of trade policy, rather than worrying about every rhetorical volley.

"I haven't seen anything at this point that we are in a trade war," he said.

Those inclined to the view that protectionism is an intensifying threat have pointed to the Trump administration's decision this week to slap punitive tariffs on imported solar panels and washing machines - a step that ratcheted up fears of a hostile Chinese response.

The WTO chief dismissed that view. "The tensions between the US and China are not new," he said. "They have been there for some time."

Trump's reception here appeared to signal a normalising phase of his presidency among the business elite. Many of those who absorbed his speech were struck by his restraint, his apparent desire to ingratiate himself.

"It was not what people would have expected," said Ishmael Sunga, chief executive of the Southern Africa Confederation of Agricultural Unions, a trade group.

"He made no controversial statements. He was talking to the crowd of people that he's been brought up to be part of."

Not that the charm offensive worked on everyone.

As she departed Trump's speech, Lyn Cobley, chief executive of Westpac Institutional Bank, Australia's oldest bank, took home the message that the United States was eager for investment. But she could not shake her discomfort with the messenger.

"As a female, the things we found out about him prior to his taking office, I find very disturbing," she said. "It was a very pro-business speech, but you're always left questioning his intent."

In Davos, the global elite ponders on income inequality, lack of trust in leaders

Countries shouldn't pull in different directions on trade: Theresa May 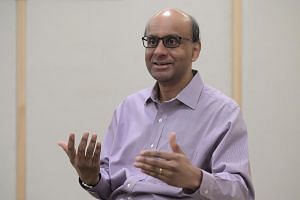 Innovation at core of Asean's next phase of development, DPM Tharman says in Davos 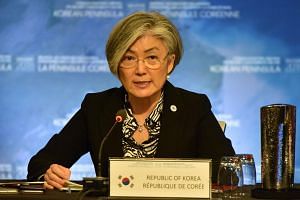