MONSEY, NEW YORK (AFP) - When a machete-wielding intruder stormed into a rabbi's house in a New York suburb during a Jewish festival late last Saturday (Dec 28), Joseph Gluck fought back.

"He was a big, husky, guy," said 30-year-old Gluck on Sunday, recalling that the attacker wore a scarf covering his face.

"I could only see his forehead and his eyes. He came in wielding a big knife, sword-like machete."

Mr Gluck was one of several people at the rabbi's property in Monsey, Rockland County, during celebrations for Hanukkah.

"He started hitting people right and left," continued Mr Gluck, adding that the attacker did not say anything as he slashed victims.

The witness added that the weapon had a big handle and the attacker just "swung it back and forth".

"Everyone was screaming and panicking and shouting 'out out out'. It was chaos," Mr Gluck said.

He said he shouted at the attacker to try to get him to stop knifing others.

"He didn't, so I threw a coffee table at the guy. Then he started to come after me," he told reporters.

The attacker followed him out of the house.

"He started to scream, 'Hey you, I'll get you.' I screamed for everybody to move away, so that all the people wouldn't get hurt."

Mr Gluck said he then saw the attacker try to enter a synagogue next door to the rabbi's house but found the door locked.

"I didn't know how many people were in the synagogue. I just wanted to make sure that, God forbid, he shouldn't go into the synagogue."

The man then went to a car and sped away. Quick-thinking Mr Gluck said he noted down the licence plate number of the car and handed it to police. Police later arrested a suspect.

Victims were rushed to nearby hospitals. There were no official details on their injuries.

The attack happened at about 10pm last Saturday, the seventh night of Hanukkah.

It was the latest in a spate of attacks on the Jewish community in the New York area in recent weeks. 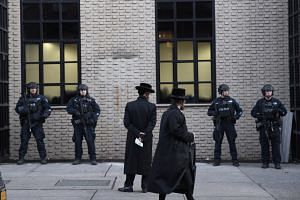 Five stabbed at Hanukkah celebration in latest attack on Jews

There was a solemn mood in Monsey, a leafy, well-to-do town, on Sunday morning as worshippers attended synagogues to pray for the victims.

"We never thought anything like this could happen here," Mr Joel Spitzer, who lives opposite the rabbi, told AFP.

He says he now lives in fear of future attacks.

"It's always in the back of your mind. What's preventing it from happening again?" he said.

Rockland has the largest Jewish population per capita of any US county, with 31.4 per cent, or 90,000 Jewish residents.

Mr Spitzer added that he wanted to buy a gun to protect himself and said it was a worrying time for the community.

Earlier this month, a shooting at a kosher deli in Jersey City killed six people including two suspects.

"One is more than enough, but this is too many," Mr Spitzer said.

Another resident, who asked not to be named, said members of the Jewish community felt "angry and scared".

"It's a very nice community here. It's always felt secure. This attack is completely shocking," he added.