Just after midnight on Friday (Nov 16), a group of six people was descending from the 95th floor of Chicago's 875 N. Michigan Avenue building, the famous 100-storey skyscraper formerly known as the John Hancock Center, when they heard it, as 50-year-old tourist Jaime Montemayor told CBS Chicago.

The group in the elevator had gone up to the 95th floor to visit a swanky restaurant overlooking the skyline, and they had chosen the express elevator on their way down. But suddenly, it started moving a little too fast for comfort.

It started to get "bumpy," like an incoming flight to Chicago, a Northwestern law student who was in the elevator told the Chicago Tribune. It whizzed past all the usual stops, falling and falling and falling 84 floors before coming to an abrupt stop somewhere between the 11th and the 12th.

And then came the panic.

The strangers started "freaking out," the law student, who declined to be identified, told the Tribune. Some were screaming, others crying. Montemayor, who was visiting with his wife from Mexico City, said he and his wife held each other tightly and began to pray. 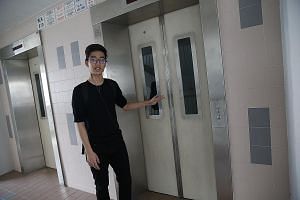 They pressed the emergency button. The six strangers - including Montemayor and his wife, two law students from Northwestern University and two others, including a pregnant woman - were stuck in the elevator for roughly two and a half hours as firefighters tried to figure out a way to reach them.

The problem? They were trapped in a "blind shaft," meaning there were no doors through which firefighters could enter the shaft and get to them, Chicago Fire Department Battalion Chief Patrick Maloney told reporters at the scene, according to ABC 7 Chicago. The malfunction had been caused by a snapped "hoist rope," or elevator cable, Maloney said. Other cables were still attached, keeping the elevator from plummeting to the floor.

"It was a pretty precarious situation where the cables that broke were on top of the elevator," Maloney said. "We couldn't do an elevator-to-elevator rescue. We had to breach a wall on the 11th floor of the parking garage in order to open up the elevator doors." Luis Vazquez, a friend of the Montemayors who took a different elevator to the ground floor, told the Tribune he couldn't believe what was happening.

"This is the second-most important building in Chicago? And this is the third-most important city in the United States?" he questioned. "In the 98 floors, they have no place to open any door? That is the craziest thing." Finally, the firefighters busted through the brick wall of the parking garage, creating a 1.5m by 1.5m hole through which they could see the top half of the elevator.

From inside, the trapped group could hear the firefighters drilling their way in. One of the law students captured the moment on video as a bizarre liquid oozed from the elevator door's crevice and firefighters worked to pry open the doors.

Finally, just before 3 am, they were rescued. None of the six were injured.

"When they opened the door," Montemayor told the Tribune, "the feeling was, 'Thanks, bud!'

A Chicago Buildings Department spokesman told the Tribune that the elevator had last been inspected in July and that the cause of the cable's malfunction would remain under investigation.

On Saturday, ABC 7 Chicago reported that tourists had to go up to the 95th floor in a service elevator operated by building employees while the investigation and maintenance continued.

The building's general manager could not be immediately reached for comment regarding the status of both the investigation and the ongoing maintenance.