WASHINGTON (AFP) - A week after the worst mass shooting in Texas' history, hundreds gathered near the First Baptist Church in Sutherland Springs for a Sunday (Nov 12) morning service as mourners sought healing through prayer.

Held in a large white tent in a baseball field a few blocks from the church, around 700 people listened to pastor Frank Pomeroy's sermon and sang hymns, according to local media reports.

"I knew everybody who gave their life that day. Some of them were my best friends. And my daughter," an emotional Pomeroy told the congregation, the San Antonio Express-News reported.

Pomeroy's 14-year-old daughter Annabelle Renee Pomeroy was one of 26 people killed on Nov 5 when gunman Devin Kelley opened fire with an assault rifle at the church, located 50 km south-east of San Antonio.

"I have no doubt they're dancing with Jesus today," said the pastor, who was also joined by Texan Senator John Cornyn and local pastor Mark Collins.

Members of the crowd - which included victims and their families - each received a printed prayer sealed in a plastic bag, the Express-News reported.

"Lord, heal the hurting. Be with those that are alone after losing their loved ones. Give them the strength to go on," it read. 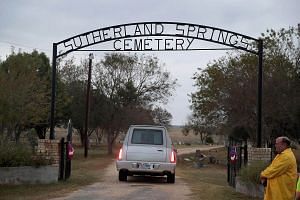 Still in shock, a Texas town starts to bury its dead after church massacre

Later Sunday, a temporary memorial opened inside the church. Cleaned, restored and painted completely white by volunteers, it contained 26 empty chairs, accompanied by recordings of previous sermons playing in the background.

Inscribed in gold with a victim's name and arranged in the spots where they sat during worship, each seat was also adorned with a single rose.

"I haven't seen this done in other catastrophes," Pomeroy said, the Washington Post reported. "But I want the world to know that that building will be open so that everyone who walks in there will know that the people who died lived for their lord and savior."

Shooter Devin Kelley, 26, received a "bad conduct" discharge from the US Air Force after being court-martialled in 2012 and convicted of domestic violence.

However, in an error under investigation by the Air Force, his conviction was not entered into a national database used to run background checks on would-be gun owners.

Speaking after the service, KXAN reported Sen. Cornyn said he is looking to introduce legislation to address background check protocol as early as Monday.