WASHINGTON (BLOOMBERG) - Huawei Technologies Co. hired the law firm Sidley Austin LLP to lobby on trade as the US pressures allies to join it in blacklisting the Chinese telecom giant and the company finds itself increasingly mired in President Donald Trump's trade war with Beijing.

The lobbying, which began in July, will focus on export controls, trade sanctions "and other national security-related topics", according to a disclosure filed with the US Senate.

The document shows that Huawei is deepening its ties to Sidley Austin, which is already working on the company's legal challenges in the US, while also ramping up its lobbying presence.

Huawei, which is under an existential threat after the Trump administration blocked it from buying American technology over national-security concerns, has been drawn into the latest escalation of the trade war.

Only six weeks ago, following a meeting in Japan with Chinese President Xi Jinping, Trump said he'd delay imposing some restrictions on US companies' sales to Huawei. The US even invited companies to apply for licenses under an exemption to the Huawei ban.

But Bloomberg reported on Aug 8 that the White House was holding off any decisions on those licences. The delay follows a series of rapid-fire, tit-for-tat moves including Trump announcing plans to impose tariffs on US$300 billion (S$416 billion) of Chinese imports in September and China halting purchases of US farm goods. The US also declared China a currency manipulator.

Sidley Austin is already defending Huawei and a US affiliate against charges that they defrauded at least four banks by concealing business dealings in Iran in violation of US sanctions.

US prosecutors are seeking to disqualify the company's lead lawyer in the case, James Cole, because they say his former role as the No. 2 at the Justice Department gave him access to classified information that represents an "obvious conflict of interest." A hearing has been scheduled in the matter in September.

Meng Wanzhou, Huawei's chief financial officer and the daughter of its billionaire founder, Ren Zhengfei, is also charged in the case. She remains free on bail in Vancouver while she fights extradition to the US.

Sidley is also representing Huawei in a suit against the US over seizure of telecommunications equipment during an investigation into whether the gear required export licenses. Neither Cole nor the lawyers listed in that lawsuit are among the lobbyists on the disclosure. 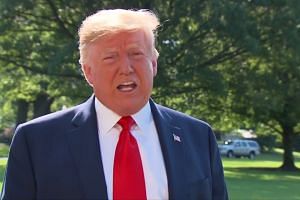 US government staff told to treat Huawei as blacklisted

Huawei's founder wants an 'invincible iron army' to fight US

The Chinese company is one of the world's biggest purchasers of semiconductors. Continuing those sales is crucial to the fortunes of chipmakers such as Intel Corp., Qualcomm Inc. and Broadcom Inc., who sent their chief executives to meet with Trump in July.

Huawei has seen a dramatic slowdown in sales growth as it deals with the US campaign.

Alphabet Inc.'s Google stopped providing Huawei with a version of its Android operating system, which lets apps run and provides mobile security on smartphones. That means Huawei, the world's second-biggest smartphone seller, can no longer pre-install Google's popular apps, like Gmail and YouTube, on Huawei devices.

To fight back, Huawei last week unveiled an in-house operating system, called HarmonyOS, saying it can replace Android if Google's software is barred from its future smartphones. But Ren also said the company needed a lot more time to build an apps ecosystem, a requirement for any operating software to thrive in the long run.

Huawei, which the US says poses a risk because it must cooperate with Beijing's espionage agencies under Chinese law, is kicking off a yearslong overhaul to create an "iron army" that can help it survive an American onslaught while protecting its lead in next-generation wireless, Ren warned in an internal memo seen by Bloomberg News.

The US says Huawei can build backdoors into its equipment and that it has stolen other companies' intellectual property. The Shenzhen-based company counters that governments and customers in 170 countries use its equipment, which poses no greater cybersecurity threat than that of any communications technology vendor.

Huawei says that the campaign results from Washington's realisation that the US has fallen behind in developing fifth-generation mobile networks.

Huawei, which had all but shut down its Washington lobbying operation at the end of 2018, has also recently hired the law firms of Steptoe & Johnson LLP and Jones Day as lobbyists. After Samir Jain, a Jones Day partner who served on President Barack Obama's National Security Council, registered to lobby for the company, Trump criticised the move in a tweet. The company says Jain will help with legal efforts and not lobby.

Sidley Austin also represents the US division of Chinese video surveillance company Hangzhou Hikvision Digital Technology Co., Alibaba Group Holding Ltd. and organisations with ties to the governments of Hong Kong and Russia, according to disclosures. It also represents Bloomberg LP, the owner of Bloomberg News.