NEW YORK (NYTimes) - Scientists say the effects of Hurricane Harvey, which has been stalled over the Texas Gulf Coast since Friday and dumped more than 50cm of rain in some areas, were worsened by a lethal confluence of meteorological events: warm water in the Gulf of Mexico that intensified the rainfall, and a lack of winds in the upper atmosphere that could have steered Harvey away from land.

Exacerbating the situation, said Hal Needham, a storm surge expert and founder of the private firm Marine Weather & Climate in Galveston, Texas, was that the storm surge elevated Galveston Bay, blocking drainage of the rain that pummelled coastal and inland areas.

"A 2- or 3-foot storm surge alone would not have been catastrophic," Needham said. "It was all these ingredients coming together." And it's not over.

Dennis Feltgen, a spokesman for the National Oceanic and Atmospheric Administration's National Hurricane Centre in Miami, said the driving rains would continue for another two or three days, pouring an additional 38cm to 63cm over parts of Southeast Texas. Some areas, he said, could see as much as 127cm of rain.

"This is unprecedented," he said.

Yet it does have some parallels. J. Marshall Shepherd, director of the atmospheric sciences program at the University of Georgia, said Harvey is very much like Allison, a tropical storm that badly flooded Houston in 2001 because it lingered over the city and dumped prodigious amounts of rain. 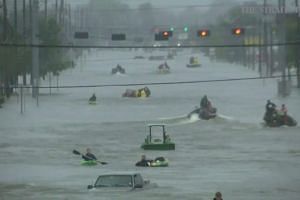 "In some ways, I think this event is going to far surpass what we saw in Tropical Storm Allison," Shepherd said.

The atmosphere is not helping to push it anywhere else.

"The steering currents that would normally lift it out of that region aren't there," he said.

Hurricanes are essentially large weather engines fuelled by the warm waters of the ocean below.

The mind-boggling amount of rainfall during Harvey is a function of the storm sitting by the Gulf of Mexico and continuing to draw moisture directly from it. Because of the orientation of the storm, Shepherd said, "you've just got this stream of moisture firehosing into the Houston region," as the moisture is constantly replenished by the gulf. "This could go down as the worst flood disaster in US history."

Scientists are increasingly able to link some extreme weather events to climate change, but when it comes to hurricanes, many say there remain a number of unknowns. What is clear, though, is that rising global temperatures warm the oceans, which causes more water to evaporate into the atmosphere.

The buildup of moisture in turn contributes to the global increase in extreme rainfall, said Kenneth Kunkel, a researcher with the North Carolina Institute for Climate Studies.

Even without climate change as a factor, Kunkel said, oceans are normally warm this time of year. But, he pointed out, the Gulf of Mexico has been warmer than average lately, most likely feeding into the deluge.

Several scientists stressed that while the damage of Hurricane Harvey was unrelenting, it was not unexpected.

Forecasters were anticipating a very wet storm to park over Houston for an extended period.

"This, honestly, is playing out, unfortunately, exactly as we thought it would several days ago," Shepherd said.

He said he grew worried when he saw public statements of relief that the storm had been downgraded from Category 4 strength to a tropical storm. He said the change in technical terminology may have confused the public and led local officials to lose focus on the greater threat, a multiday rain event.

"There was always a one-two punch with this particular storm, but we were always more concerned about the 'two,' the rainfall," Shepherd said. "Once that subsided, people like me said, 'OK, we're just getting started.'"

Different models predict different aspects of storms. Rick Luettich is director of the University of North Carolina's Institute of Marine Sciences and an internationally recognised expert on storm surge, and a principal developer of the ADCIRC computer programs, which can be used to predict storm surge. For Harvey, Friday's calculations suggested a surge of 2.4m to 3m in the coastal areas, with as much as 3.7m in some of the shallow coastal estuaries.

The water threat that is getting the most attention with Harvey, however, is the intense rainfall predicted as the storm lingers over the Houston area. With storms growing wetter thanks to climate change, Luettich and his collaborators are trying to add rainfall calculations to the coastal surge forecasting model.

"People don't care, if they got wet or got drowned, whether their water was salty or fresh," he said.