WASHINGTON (WASHINGTON POST) - This is the story of how a racist suggestion - that four congresswomen of colour "go back" to the "totally broken and crime infested places from which they came" - became an angry rallying cry in three short days.

Never mind that three of the four women were born in the United States and the forth, Omar, is a Somali refugee who became a naturalised US citizen at the age of 17. The ensuing controversy unspooled as if from muscle memory - with all Trump's world a stage, and all the men and women within it merely players.

First there was the early silence and pantomimed shrugs, especially from inside the White House and members of the Republican Party.

Then, on Monday came the exposition - part clarification and part double-down - in which Trump and his allies claimed he was simply saying that if these women were so unhappy living in the United States, well, no one was forcing them to stay.

Later that day came the political calculation, in which the president, his campaign and the Republican National Committee eagerly elevated the minority women, known collectively as "the Squad", as the allegedly anti-American and anti-Semitic faces of the Democratic Party. 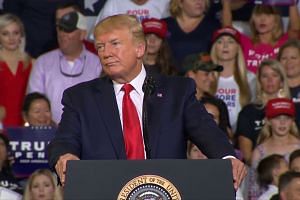 Trump disavows 'send her back' rally chant, many Republicans alarmed

Trump says does not have 'racist bone' in his body

It was an attempt to transform the feud into one of patriotism and to cast Trump - a commander in chief who has literally wrapped himself around the flag - as the red-white-and-blue-caped crusader.

And then, finally, the denouement - a previously planned rally in Greenville, North Carolina, on a hot, steamy July night, where the crowd took up Trump's cause for him, chanting, "Send her back! Send her back!" as he railed against Omar.

The president and his allies may have aimed for plausible deniability - he's not racist and he in no way suggested that these women were somehow "others" who belong elsewhere, came the refrain - but his supporters seemed to understand exactly what he meant.

And they were more than happy to oblige.

As Trump revved up his broadsides against Omar, a smattering of "Send her back!" calls broke out. But it wasn't until Trump intoned that "Omar has a history of launching vicious, anti-Semitic screeds" that the entire arena at East Carolina University began to roar.

The president paused, as if to let the moment unfurl, to fan another gust of oxygen onto the fire of racial animus devouring his base. He let go of the lectern, and turned his body to the left. He gripped it again with both hands, and stared forward, before swivelling to the right.

For 13 full seconds, the crowd shouted that Omar - a US congresswoman, a US citizen - should be sent back to the country from which she fled.

His supporters booed at the mere mention of the "four congresswomen", and the president delivered each of their names with a flourish, each foreign-sounding enunciation another opportunity for his supporters to howl their disapproval.

Trump dismissed Ocasio-Cortez, the woman reverently known as "AOC", by choosing a single surname: "I don't have time to go with three different names," he said. "We'll call her Cortez."

And then, in the messy aftermath, many in Trump's orbit and the Republican Party squirmed and wriggled, sighing that perhaps the crowd had crossed a line, but generally unwilling to condemn the president himself.

Sure, they might not always love the words, he says, and they don't necessarily appreciate the tweets he sends. And yes, well, they certainly wouldn't have phrased it that way themselves.

But, as Representative Tom Emmer of Minnesota, chairman of the National Republican Congressional Committee, told a breakfast of reporters on Thursday morning: "There's not a racist bone in the president's body."

"What he was trying to say, he said wrong," said Emmer who, when asked about the chant, decried "that kind of talk" and added, "I don't agree with that."

Representative Mark Walker also tweeted after the rally that he did not approve of the chants. "Though it was brief, I struggled with the 'send her back' chant tonight referencing Representative Omar," he wrote, noting that Republicans should instead be focused on her "great disdain for both America & Israel" rather than "phrasing that's painful to our friends in the minority communities".

Walker, the vice-chairman of the Republican caucus, went further on Thursday morning, telling reporters he felt the chant was "offensive". "That does not need to be our campaign call like we did the 'Lock her up!' last time," Walker said, an allusion to a frequent chant at Trump rallies in 2016, referring to Democrat Hillary Clinton.

Indeed, there was a time when calling for a political opponent to be jailed would have been extraordinary. But under Trump, it became just another rallying cry, like the calls to "Build the wall!" at the nation's southern border. 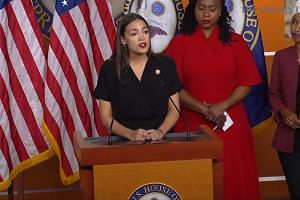 Trump's attacks on Congresswomen challenge the idea of America

Biden says Trump's attacks on Omar, other congresswomen are 'despicable'

Now there is a very real possibility that a chant, which began as a suggestion from a racist tweet, will simply be added to the panoply of greatest hits at his political rallies - another angry interlude in the Trump Show.

Trump's dubious history on the topic of race - from nativist to racially charged to downright racist - is long and well-documented, even just from his time as a politician onward.

Trump fuelled his political rise in part on the lie of birtherism - the racist myth that Mr Barack Obama was not born in the country.

During the 2016 campaign, he rolled out a Muslim ban, and said that Indiana-born federal judge Gonzalo Curiel could not fairly rule on a case involving Trump University because of his "Mexican heritage".

Once in office, Trump declined to condemn white supremacists after a rally in Charlottesville, Virginia, that left a woman dead, saying "both sides" were to blame.

And on Wednesday night, Trump's attacks on the four minority members were largely pre-scripted, delivered from the teleprompter and not the kind of off-the-cuff riffs that often plunge the president into controversy.

Upon landing in Greenville before the rally, White House spokesman Hogan Gidley told the president's travelling press corps that it'd be sure to want to "tune in" later that evening.

After the "Send her back!" chants, the president seemed unrepentant. He continued his attacks on Omar and, roughly 15 minutes later, he turned his attention again to the four women he called "hate-filled extremists".

Trump continued: "You know what, if they don't love it, tell them to leave it."

By Thursday, Trump had injected the "go back" sentiment into the ether, with coverage of the "Send her back!" chants dominating cable news. And so the president seemed to attempt to seize higher: He disavowed the chant.

Asked by reporters in the Oval Office why he did not move to stop the chant, the president falsely claimed that he had.

"I think I did," he said. "I started speaking very quickly." "I was not happy with it," the president said, without a hint of irony. "I disagree with it."