After more than a year of surprises, shocks and insults, the unprecedented US presidential campaign is over and the big day is finally here.

The exceptions are three small towns in New Hampshire which voted at midnight on Tuesday and the results reflected how close the contest in the state will be.

While Democrat candidate Hillary Clinton won Dixville Notch and Harts Location, she lost to her Republican rival Donald Trump in Millsfield. The vote tally so far: 32 for Mr Trump, 25 for Mrs Clinton.

The two candidates wrapped up their campaigns with two midnight rallies before large rowdy crowds. Mrs Clinton chose to wrap up in the critical battleground state of North Carolina. Mr Trump, in turn, capped off his campaign with a rally in Michigan, a Democrat-leaning state that he hopes to move to his corner.

At times, the closing speeches appeared to offer a summary of all that has taken place in the past 18 months, with both candidates' speeches featuring their greatest hits.

Mr Trump, speaking to a working class crowd in Michigan - a state known as the hub of US auto manufacturing - emphasised his populist economic message that has been a core part of his platform. He pledged to bring back the manufacturing jobs that the state has lost and attacked free trade deals like the North American Free Trade Agreement and the Trans Pacific Partnership.

"We are going to bring back the automobile industry to Michigan, bigger and better than ever before," he told the crowds. "If we win Michigan, we will win this historic election and then we truly will be able to do all the things we want to do."

And though a clutch of late polls showed Mrs Clinton's lead inching up, Mr Trump stressed that he was confident of victory.

"Today is our independence day. Today the American working class is going to strike back, finally," he said to loud cheers, adding that after vanquishing the strong field of Republicans in the primaries, he now had "one flawed candidate left to beat".

But after a week of discipline and restraint from the Republican nominee, his final day of rallies contained hints of his more shoot-from-the-hip style. In Michigan, he largely spoke off script and revived some of his favourite attacks against an opponent he constantly refers to as "crooked Hillary".

"Hillary Clinton is the most corrupt person ever to seek the office of the president of the United States. She is being protected by a totally rigged system that I have been talking about for a long time. Now is time for the American people to deliver justice at the ballot box," he said. 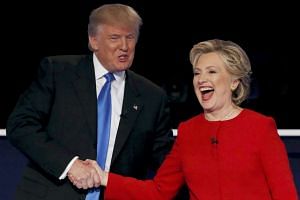 All you need to know about US presidential election 2016

Over in Raleigh, North Carolina - where Mrs Clinton was appearing with her husband Bill Clinton, her daughter Chelsea, as well as pop stars Lady Gaga and Jon Bon Jovi - the Democratic Party nominee sought to highlight what she described as the stark choice facing American voters. 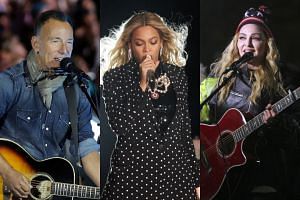 She said: "I really believe it is the most important election of our lifetimes. Because we've never had a clearer choice. It is a choice between division and unity, between strong steady leadership or a loose cannon who could put everything at risk... it is a choice that really goes to the heart of who we are as Americans."

Mrs Clinton also repeated the story of  Mr Khizr Khan, the father of a fallen Muslim-American soldier, as she assailed Mr Trump for his divisive rhetoric against Muslims.

"Would his son have a place in Donald Trump's America - someone who paid the ultimate price in serving the country? We can answer that question tomorrow resoundingly - yes, absolutely," she said.

Mrs Clinton also held the biggest rally of her campaign in Philadelphia on Monday night, drawing a crowd that the city's Fire Department put at 33,000.