SAN FRANCISCO (NYTIMES, BLOOMBERG) - Hundreds of Google employees, upset at the company's decision to secretly build a censored version of its search engine for China, have signed a letter demanding more transparency to understand the ethical consequences of their work.

In the letter, which was obtained by The New York Times, employees wrote that the project and Google's apparent willingness to abide by China's censorship requirements "raise urgent moral and ethical issues".

They added: "Currently we do not have the information required to make ethically-informed decisions about our work, our projects, and our employment."

The letter is circulating on Google's internal communication systems and is signed by about 1,400 employees, according to three people familiar with the document, who were not authorised to speak publicly.

Addressing this, Google Chief Executive Officer Sundar Pichai told employees at a meeting that plans to re-enter China with a search engine are "exploratory" and in "early stages".

The accounts came from two people familiar with the discussion at the meeting of the Alphabet Inc. unit. They asked not to be identified talking about private matters.

Google didn't respond to requests for comment. The discussion at the all-hands meeting was the first time Google executives addressed the company's plans for a possible return to China.

At one point, Pichai said the company is not close to launching a search product in China, according to another person who attended the meeting.

The internal activism presents another obstacle for Google's potential return to China eight years after the company publicly withdrew from the country in protest of censorship and government hacking. 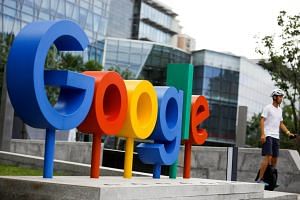 Google's interest in bringing search back to China came to the forefront earlier this month, when reports surfaced that the company was working on a search app that restricts content banned by Beijing.

The project, known internally as Dragonfly, was developed largely in secret, prompting outrage among employees who worried they had been unwittingly working on technology that would help China withhold information from its citizens.

"We urgently need more transparency, a seat at the table, and a commitment to clear and open processes: Google employees need to know what we're building," the letter said.

The letter also called on Google to allow employees to participate in ethical reviews of the company's products, to appoint external representatives to ensure transparency and to publish an ethical assessment of controversial projects. The document referred to the situation as a "code yellow," a process used in engineering to address critical problems that impact several teams.

Google declined to comment on the letter. It has said in the past that it will not comment on Dragonfly or "speculation about future plans."