WASHINGTON (AFP) - As the United States and China pursue trade talks, there is a "good chance" that more US firms will be granted licences to sell products to controversial Chinese telecoms giant Huawei, White House economic adviser Larry Kudlow said on Sunday (June 30).

Mr Kudlow's comments came after US President Donald Trump and Chinese President Xi Jinping agreed last Saturday to a truce in their trade war, and Washington pledged to hold off on new tariffs while they negotiate.

While Mr Trump signalled the softer position on Huawei, a sticking point in trade talks, by saying US companies could sell equipment "where there's no great national security problem", Mr Kudlow added a bit of detail.

The senior Trump aide told Fox News Sunday that "there's a good chance the Commerce Department, Secretary (Wilbur) Ross, will open the door on that and grant new licences".

The US has said it fears that systems built by Huawei - the world leader in telecoms network equipment and number two smartphone supplier - could be used by China's government for espionage via built-in secret security "backdoors". Huawei has vigorously denied that, saying the US has never provided proof to substantiate it.

Many US lawmakers, including Senate Republicans like Ted Cruz and Marco Rubio, are concerned about any lifting of the effective ban against Huawei accessing crucial American technology or operating in the US market.

"If President Trump has agreed to reverse recent sanctions against Huawei, he has made a catastrophic mistake," Mr Rubio tweeted last Saturday.

Mr Kudlow emphasised that Huawei will remain on the so-called US Entity List - foreign companies and individuals that are subject to specific export and technology transfer licensing requirements. 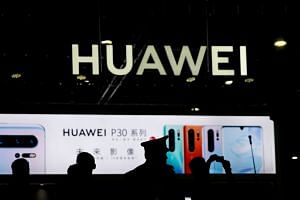 Trump says he will allow Huawei to buy from US suppliers

"This is not a general amnesty," he said.

"The Commerce Department will grant some temporary additional licences where there is a general availability" of the products to be sold, he added.

In a later interview on CBS talk show Face The Nation, he said: "We understand the huge risks regarding Huawei."

On the general issue of US-China trade talks, Mr Kudlow declined to offer any deadline for the resolution of the dispute between the world's top two economies, though he admitted the talks could "go on for quite some time".

"There are no promises, there's no deal made, no timetable," he said. "Just resuming the talks... is a very big deal."