The suit, filed in a New York court on behalf of Abu Dhabi's International Petroleum Investment Company (IPIC), names Goldman Sachs as well as former Goldman officials who were charged by the US Justice Department in indictments unsealed earlier this month.

"This action seeks redress for a massive global conspiracy on the part of the defendants to defraud and injure plaintiffs," said the lawsuit, which also named former executives from IPIC and its subsidiary Aabar Investments.

"As part of the scheme, Goldman Sachs conspired with others to bribe IPIC's and Aabar's former executives... to join the conspiracy and act against the interests of IPIC and Aabar." Goldman Sachs said it would fight the lawsuit.

"We are in the process of assessing the details of allegations and fully expect to contest the claim vigorously," a Goldman Sachs spokesman said in an emailed response.

Goldman Sachs has been under scrutiny since the Justice Department on Nov 1 unveiled indictments against two former Goldman Sachs executives who were charged as key players in the scandal surrounding the scandal-plagued Malaysian sovereign wealth fund 1MDB.

One of the former Goldman officials, Tim Leissner, pleaded guilty and agreed to pay US$43.7 million (S$60 million) in restitution of ill-gotten gains. 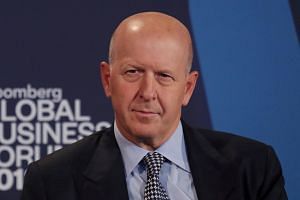 In a Nov 2 securities filing, Goldman Sachs noted the criminal documents released by the Justice Department alleged "the firm's system of internal accounting controls could be easily circumvented and that the firm's business culture, particularly in South-east Asia, at times prioritised consummation of deals ahead of the proper operation of its compliance functions."

Goldman Sachs said it was cooperating with federal prosecutors and other authorities, adding that it was "unable to predict the outcome" of the probe but that a resolution could result in "significant fines, penalties and other sanctions against the firm."