NEW YORK (BLOOMBERG) - A "tough legal setup" for Goldman Sachs Group Inc. in the 1MDB case may result in fines of as much as US$9 billion (S$12.2 billion), Citi analysts Keith Horowitz and Eileen Shao wrote in a note.

The scandal, centering on the firm's raising money for a Malaysian state investment fund, has been weighing on Goldman's stock price for months, they said. Shares are probably "fairly valued" now, given the continued overhang.

Since November, Goldman's "underperformance represents about US$12 billion of lost market cap, which we attribute largely to 1MDB concerns".

While many investors may view Goldman shares trading at tangible book multiple as a buying opportunity, "we view it as appropriate", Horowitz and Shao said.

Goldman's shares are down about 13 per cent since the end of October, more than rival Morgan Stanley's 8 per cent decline. The KBW Bank Index is up about 1 per cent in the same span.

Citi estimates Goldman will receive penalties ranging from US$1.5 billion to US$9 billion, and assumes a base case of US$4 billion to US$5 billion, though business activities are unlikely to be suspended.

Onerous fines and restrictions may depend on perceptions about Goldman's compliance structure, Horowitz and Shao said.

"If regulators view this more as an isolated incident and believe Goldman has an effective compliance programme, consistent with Goldman's stated position, then the fine would be on the lower end of the range."

Citi's more bearish scenarios "get to the culture of the firm". 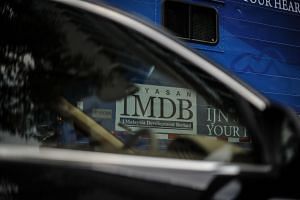 Malaysia will not compromise in 1MDB talks with Goldman: Anwar

Investors may have "initially downplayed the severity of the scandal as they believed the issue would be isolated to the conspirators and have limited direct impact on Goldman itself".

That changed when news of a potential connection to Lloyd Blankfein, alleging the then-CEO attended meetings with Jho Low, began to surface on Nov 8, they said.

Goldman fell 11 per cent over the next two trading days "as the market started to price in the implications that knowledge of Goldman's role in the 1MDB conspiracy may have been greater than originally thought".

Horowitz and Shao note Goldman has said Blankfein doesn't recall any one-on-one meeting with Low, and the bank hasn't "seen any record to suggest such a meeting occurred".

Goldman's shares are now trading not far from mid-November's level. Citi rates Goldman shares neutral, with a price target of US$210.