NEW YORK (REUTERS) - Relentless global warming threatens the potential success of a sweeping set of goals established by the United Nations to tackle inequality, conflict and other ills, officials said on Tuesday (July 9).

Climate change imperils food supplies, water and places where people live, endangering the UN plan to address these world problems by 2030, according to a report by UN officials.

The latest report, which called climate change "the greatest challenge to sustainable development", came as diplomatic, business and other officials gathered for a high-level UN forum to take stock of the goals' progress.

"The most urgent area for action is climate change," said Mr Liu Zhenmin, UN Under-Secretary General for Economic and Social Affairs, in the report.

"These effects, which will render many parts of the globe uninhabitable, will affect the poor the most." 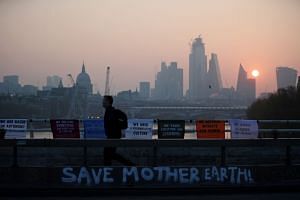 Progress has been made on lowering child mortality, boosting immunisation rates and global access to electricity, the report said.

Yet extreme poverty, hunger and inequality remain hugely problematic, and more than half of school-age children showed "shockingly low proficiency rates" in reading and maths, it said.

Two-thirds of those children were in school.

Human trafficking rates nearly doubled from an average 150 detected victims per country in 2010 to 254 in 2016.

But it was unclear how much of the increase reflected improved reporting systems versus an increase in trafficking, said Ms Francesca Perucci of the UN's statistics division, who worked on the report.

"It's hard to exactly distinguish the two," she said at a launch of the report.

Greenhouse gases have continued to climb, and "climate change is occurring much faster than anticipated", the report said.

At this week's goals summit, 47 countries are expected to present voluntary progress reviews. Almost 100 other countries and four cities including New York have done so.

Earlier UN reports said the goals were threatened by the persistence of violence, conflict and lack of private investment. Outside assessments have also cited nationalism, protectionism and insufficient funding.

The cost of implementing the global goals has been estimated at US$3 trillion (S$4.09 trillion) a year.