The company put out a news release early on Wednesday (April 29), commenting on the study from the US National Institute of Allergy and Infectious Diseases (NIAID), without providing details of the results.

Gilead's share price and the broader stock market have been churned in recent weeks by a series of early looks and leaks of trial data on the drug, called remdesivir.

On Wednesday, Gilead shares jumped as much as 7.1 per cent. The news appeared to boost the entire US stock market as well, with the S&P 500 gaining 2.4 per cent despite data showing a deep contraction in the US economy in the first quarter of the year.

Remdesivir, which was originally developed to treat other novel viruses, has placed Gilead at the head of the race to develop a treatment for Covid-19. The drug, which has also been tested on Ebola, has not been approved for use anywhere in the world.

A separate study released by Gilead on Wednesday said remdesivir appears equally effective when it is given over just five days, rather than the 10-day course used in the NIAID and other trials.

But the Gilead study does not have a comparison group, so its findings are considered less robust.

Taken together, the studies could signal a profound shift in the race to get Covid-19 under control. The availability of a treatment could allow the world to start reopening economies, as well as offer psychological relief to billions of people who have been self-isolating to hide from the virus.

Multiple trials of the drug are being conducted.

The NIAID trial measured how quickly patients taking it were able to be removed from supplemental oxygen therapy or were discharged from the hospital. It is not known yet how large the effect of the Gilead drug was on the patients, and if it will make a meaningful difference in their care.

The trial, run by the National Institutes of Health, aimed to sign up about 800 patients to test the drug and give a definitive answer as to whether it can help treat Covid-19.

An NIAID representative said in an email that the agency is planning an announcement on Wednesday, with the most likely venue the White House task-force briefing.

Gilead released more detailed results from another study the company itself has been conducting, comparing a five-day and 10-day course of the drug, but without a placebo group.

The study showed both groups fared about the same, suggesting that a shorter course of the medication might be about as effective as a long one, though the results were not statistically significant.

The five-day regimen "could significantly expand the number of patients who could be treated with our current supply of remdesivir," said Merdad Parsey, Gilead's chief medical officer. 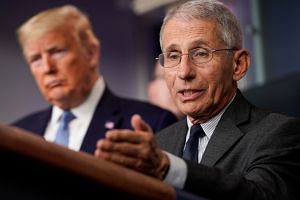 The drug will likely be approved for use in certain settings on the basis of the positive result, said Jefferies health-care strategist Jared Holz, at least until better alternatives are available.

"There is a massive bias to look at the data with half-glass-full approach," he said, adding that it was "totally fair given the current predicament".

The US Food and Drug Administration "has been engaged in sustained and ongoing discussions with Gilead Sciences regarding making remdesivir available to patients as quickly as possible, as appropriate," said Michael Felberbaum, an agency spokesman, in an email.

Last week, the World Health Organisation (WHO) prematurely and accidentally published negative results of another trial of remdesivir in China, retracting the results soon after.

The WHO post showed that the antiviral did not help severely ill patients avoid death, and it also did not reduce the amount of virus in their bodies.

Gilead has said the WHO post included "inappropriate characterisation of the study" and that there could still be potential benefits for patients who are treated early-on.

About 100 clinics around the world worked together on the NIAID study, with a central goal of seeing whether remdesivir could help more patients recover more quickly after 29 days of followup.

Unlike the Chinese trial, which was running even as strict containment measures were clamping down on the numbers of infected people, NIAID's study had the benefit of casting a net for patients just as their numbers were exploding.

After initially expecting to enroll 572 patients, researchers later said the total sample size could be more than 800 people.