NEW JERSEY - The father of late The Voice singer Christina Grimmie said he has a "gigantic hole" in his heart that will never go away after his daughter's brutal murder.

Speaking at a public memorial service on Friday (June 17), a day after the 22-year-old was buried in her hometown in New Jersey, Mr Bud Grimmie said he knows he will see his daughter again in heaven.

"She is way better off now. She is not going to be hurt anymore ... (and) God's plan is better than my plan," he was quoted as saying by the Courier-Post.

Kevin James Loibl, 27, shot and fatally wounded Christina at a concert in Orlando on June 10, where she had performed with the group Before You Exit. 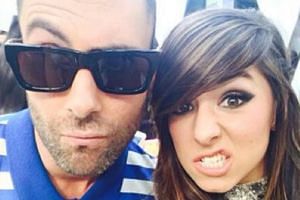 Maroon 5's Adam Levine, who coached slain singer Christina Grimmie on The Voice, offers to pay for her funeral

Gunman may be deranged fan

She was rushed to a hospital, but died of her wounds. Liobl shot and killed himself after being tackled by Grimmie's 23-year-old brother, Marcus.

Her cancer-stricken mother, Tina, broke down in tears at the memorial at the Fellowship Alliance Chapel in Medford, New Jersey, where thousands from across the country had gathered to pay their respects.

She said: "I tell you I am weak ... and declare my dependence on Jesus Christ."

A large picture of Christina was displayed on an easel in the church and her music was playing as people filed past on Friday.

"When the gunman came, her arms were open to him," he said. "Her arms were open all the time. All I'm going to say is thank God for the mark she left on this world. It's more and more clear to me now than ever before."

On Monday, Marcus said in a Facebook post that he was "blown away" after learning that Maroon 5 frontman Adam Levine "personally called my mother and said he will pay for the funeral and her plane flight".

Levine had previously tweeted that he and his wife Behati Prinsloo were "absolutely devastated and heartbroken" by Christina's death.

Behati and I are absolutely devastated and heartbroken by Christina Grimmie’s death. Our hearts go out to her family pic.twitter.com/y4OMkm0uXu

Quoting a source, People magazine described the Thursday funeral as a private gathering for family and close friends,

"Christina was truly a light in this world," the obituary notice read. "Anyone who met her was blessed by knowing her. Heaven has certainly gained an angel for their choir."

Even before appearing on The Voice singing contest, where she placed third in 2014, Christina had a large following on her YouTube channel, zeldaxlove64.