The top diplomats from the major industrial democracies said that Germany, where Navalny is receiving treatment, briefed them with confirmation that President Vladimir Putin's leading critic was poisoned.

"We, the G-7 foreign ministers, call on Russia to urgently and fully establish transparency on who is responsible for this abhorrent poisoning attack and, bearing in mind Russia's commitments under the Chemical Weapons Convention, to bring the perpetrators to justice," a joint statement said.

"We will continue to monitor closely how Russia responds to international calls for an explanation of the hideous poisoning of Mr Navalny," they said.

"We remain strongly committed to our support for democracy, the rule of law and human rights in Russia and to bolster our support to the Russian civil society."

The statement was released by the United States and included Secretary of State Mike Pompeo.

US President Donald Trump, who has courted Putin to seek better relations, had said on Friday that he had not seen proof that Navalny was poisoned.

The other G-7 nations are Britain, Canada, France, Germany, Italy and Japan. 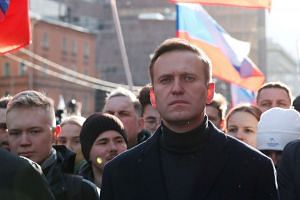 Kremlin critic Navalny has come out of coma: Berlin hospital

Russia was expelled from the then Group of Eight over its 2014 takeover of Crimea from Ukraine.

Navalny, a 44-year-old lawyer who has been a thorn in Putin's side, suddenly fell seriously ill last month as he took a flight in Siberia.