CHICAGO (NYTIMES) - The year was already shaping up to be difficult for Midwestern farmers. Incomes have slipped, farm bankruptcies have increased and widespread flooding has inundated the region, killing cattle and turning some fields into unplowable pits.

Then came the news from Washington on Friday (May 10): Trade negotiations with China, long a reliable buyer of Midwestern crops, ended without a deal. President Donald Trump raised tariffs on US$200 billion (S$273 billion) worth of imports, and the Chinese were weighing countermeasures.

The breakdown was another blow for American farmers, who just a few weeks ago thought a trade deal was imminent. They now begin another growing season with uncertainty about who will buy their crops and whether they can break even.

Though Trump pledged on Friday to help farmers - part of the coalition that put him in office - there were signs of frustration. They raised questions about his negotiating tactics. They said they were worried about what would come next given an already-struggling agricultural economy.

"Many people are just torn because people want to support the president of the United States," said Nancy Johnson, the executive director of the North Dakota Soybean Growers Association. "But it's very stressful to be in the middle of these very challenging negotiations. Because you're the person who can't take hope to the banker to get his loans for operating."

Trump is generally popular in the rural Midwest. He carried all but two Midwestern states in 2016, won more than 90 per cent of the vote in some agrarian counties and has been praised for rolling back environmental regulations. But Trump's propensity for imposing tariffs has clashed with the free-trade instincts of the region's farmers, who have watched lucrative overseas markets for soybeans and other crops shrivel. For some Midwestern Republicans in Congress, the use of tariffs has been a rare point of disagreement with Trump.

Jolene Riessen, who farms near Ida Grove, Iowa, said she remained hopeful that a trade deal would be reached, but she said that the drawn-out negotiations had already hurt her business.

Riessen said she scaled down her cattle operation, partly because of the trade war, and delayed selling some of her soybean crop from last year. She said she remains worried about making new investments in her farm. 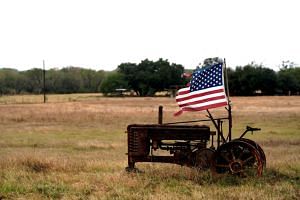 "When the farmer does well, so does the rest of the United States," said Riessen, who declined to say whom she voted for in 2016. "And we've just been kind of struggling."

Trump, who has accused China and other countries of taking advantage of the United States on trade, said he would help farmers weather the trade uncertainty. On Twitter, Trump suggested that the US government could buy billions of dollars of agricultural products from farmers. Sonny Perdue, the agriculture secretary, said separately that Trump had directed his department to work on a plan to help farmers.

"@POTUS loves his farmers and will not let them down!" Perdue said on Twitter.

In Shelby County, Indiana, Phil Ramsey said he appreciated the president's reasons for revisiting trade deals, but said the ailing farm economy had been brutal in deeply personal ways. He said he was going without health insurance to save money. He said he has delayed some equipment purchases.

But Ramsey, a Republican who voted for the president, said his primary frustrations were with China, which the United States accused of reneging on some trade promises, and with Congress, which has not approved a new trade deal with Canada and Mexico.

"He can't do it by himself," Ramsey said of the president. "He needs the support of all the US government."

The lack of a trade deal was especially painful in Nebraska, which saw widespread damage from flooding in March. The damage there, as well as in parts of Missouri and Iowa, has turned cropland into debris fields and forced some farmers to evaluate whether they could continue making a living off the land.

"It's a little bit of piling on when you have so many different things that you're struggling against," said Steve Nelson, the president of the Nebraska Farm Bureau. "Obviously, the trade issue is one of those. The weather is one of those."

Lance Atwater, 29, who farms corn and soybeans near Ayr, Nebraska, escaped the worst of the flooding but said that he has seen prices for some of his crops plunge. Atwater, a Republican who voted for Trump, said he was eager for a trade deal but taking a wait-and-see approach on the president's policies.

"He's claimed that he'll get these trade deals worked out and that it will be a better deal," Atwater said on Friday as he hauled grain. "That's what we're wanting to see - see those results."

Jerry Mohr, 66, a fourth-generation farmer who grows corn and soybeans near Eldridge, Iowa, said he was growing frustrated.

"I admire the president for wanting to make change," said Mohr, a Republican who voted for Trump, "but now we need to perform."

He said the president's success in finalising trade deals, as well as expanding ethanol production, would help determine what happens in next year's election.