The four - Democrat Joe Manchin and Republicans Lisa Murkowski, Susan Collins and Jeff Flake - have not fully committed themselves on the vote.

Any nominee to the Supreme Court must be approved by the Senate, where President Donald Trump's fellow Republicans hold a 51-49 majority and Vice-President Mike Pence can cast a tie-breaking vote.

In a procedural vote on Friday, the Senate voted 51-49 to shut off debate and advance the nomination to a final vote, with two of the four undecided senators breaking party ranks in the vote.

Murkowski opposed Kavanaugh while Manchin backed him. It was not clear what the two would do in the final vote.

At least two senators would have to switch their positions to the other side to change the outcome on the final vote.

She has said she was troubled by accusations of sexual misconduct made against Kavanaugh by three women who said they knew him in high school and college. Kavanaugh angrily denied the allegations in a dramatic Senate committee hearing.

Alaska Natives, whose support in past elections has been crucial, have lobbied her to vote against Kavanaugh. 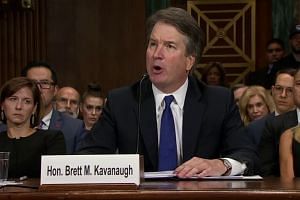 Flake: He backed Kavanaugh in the procedural vote. Afterwards, he said he would vote for the conservative appeals court judge's confirmation "unless something big changes,"according to MSNBC.

A frequent critic of Trump, the Arizona senator is not running for re-election and is seen as a possible challenger to Trump in 2020.

Collins: A Maine moderate who sometimes breaks with her party, she voted for Kavanaugh in the procedural test and said she would announce her position on the final vote at 3pm ET (3am on Saturday, Singapore time). Her state supported Democrat Hillary Clinton over Trump in the 2016 election.

Manchin: Facing a re-election vote in November in the decidedly pro-Trump state of West Virginia, he voted in favour of Kavanaugh on the procedural vote, the only Democrat to do so. He has not stated what he will do on the final vote.