LOS ANGELES (REUTERS) - Nancy Reagan, the former actress who was fiercely protective of husband Ronald Reagan through a Hollywood career, eight years in the White House, an assassination attempt and her husband's Alzheimer's disease, died on Sunday at age 94, the Reagan library said.

Michael Reagan said on Twitter he was saddened by his stepmother's death. "She is once again with the man she loved,"he wrote.

Her husband, who affectionately called her "Mommy" while she called him "Ronnie", died in 2004 after a long struggle with Alzheimer's, the progressive brain disorder that destroys memory. 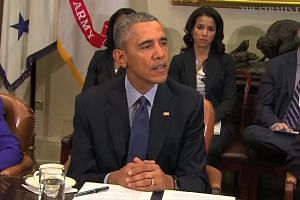 As Nancy Davis, she was a Hollywood actress during the 1940s and 1950s and married Reagan, a prominent film actor, in 1952. She then served as first lady of California during her husband's stint as California governor from 1967 to 1975 before moving into the White House after his decisive victory over incumbent Democratic President Jimmy Carter in 1980.

Her most publicised project as first lady was the "Just Say No" anti-drug campaign. After her husband developed Alzheimer's disease, she became an advocate for discovering a cure. 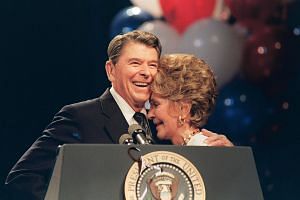 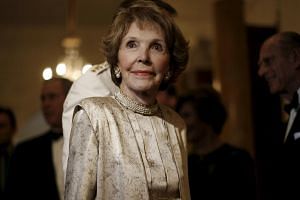 She was diminutive and publicly soft spoken but Nancy Reagan's strong will, high-tone tastes and clout with her husband made her a controversial figure during his presidency.

As Reagan's wife, political partner and adviser, she became one of America's most potent first ladies, alongside the likes of Franklin Roosevelt's wife, Eleanor, Woodrow Wilson's wife, Edith, and Bill Clinton's wife, Hillary.

"I see the first lady as another means to keep a president from becoming isolated," she said in 1985. "I talk to people. They tell me things. And if something is about to become a problem, I'm not above calling a staff person and asking about it. I'm a woman who loves her husband and I make no apologies for looking out for his personal and political welfare."

Tiny and frail in her later years, Reagan devoted her time to caring for her ailing husband at their home in Los Angeles' exclusive Bel Air enclave. She was always a stickler for protocol and detail and stoically presided over the former president's weeklong funeral and celebration of his life in June 2004.

One of her most trying times as first lady came when John Hinckley stepped out of a crowd outside a Washington hotel on March 30, 1981, and fired six shots toward the president, striking him in the chest. A .22-calibre bullet punctured his lung and nearly entered his heart. "Honey, I forgot to duck," he told her at the hospital.

Some critics lambasted Nancy Reagan as a meddlesome "dragon lady," derided her anti-drug campaign and ridiculed her for consulting an astrologer to schedule presidential events.

President Reagan called this view of his wife "despicable fiction", saying in 1987: "The idea that she is involved in governmental decisions and so forth and all of this, and being a kind of dragon lady - there is nothing to that."

The reputation was established during Reagan's time as California governor and followed her to Washington. She was first accused of being a vacuous spendthrift interested chiefly in renovating and buying new china for the White House, lavish entertaining, her designer wardrobe and the like, then portrayed as a cunning manipulator of policy and people.

Advocates of the latter view saw her influence as virtually unlimited in such matters as the dumping of presidential advisers, efforts to get a nuclear arms accord with the Soviet Union and her husband's decision to seek a second term in 1984.

Some Reagan-watchers said reports of Mrs. Reagan's influence were exaggerated and that it was merely the protective concern of a loving wife.

She frequently clashed with President Reagan's chief of staff, Donald Regan, who lambasted her in a 1988 "tell-all" book after he was ousted from the White House during the chaos of the Iran-Contra scandal in 1987. Regan disclosed that she had used astrology to decide the timing of presidential speeches and trips, and even her husband's 1985 cancer surgery.

"Virtually every move and decision the Reagans made during my time as White House chief of staff was cleared in advance by a woman in San Francisco who drew up horoscopes to make certain that the planets were in a favourable alignment for the enterprise," Regan wrote.

James Baker, who served as White House chief of staff during Reagan's first term, took a different view, telling PBS in 2011:"If there was one person who was indispensable to Ronald Reagan's political success, it was Nancy Reagan."

Nancy Reagan acknowledged she had the ear of her husband. "In most good marriages that I know of, the woman is her husband's closest friend and adviser," she wrote in her 1989 memoir, My Turn. "... But however the first lady fits in, she has a unique and important role to play in looking after her husband. And it's only natural that she'll let him know what she thinks. I always did that for Ronnie and I always will."

Ronald Reagan was known for penning innumerable letters to his wife. In one, he stated: "I more than love you, I'm not whole without you. You are life itself to me. When you are gone I'm waiting for you to return so I can start living again."

The former president's Alzheimer's struggle made Mrs Reagan a campaigner for broader human embryonic stem cell research, a stand that put her at odds with many Republicans.

"Ronnie's long journey has finally taken him to a distant place where I can no longer reach him. Because of this, I'm determined to do whatever I can to save other families from this pain," she said before his death in 2004.

Some critics dismissed her "Just Say No" efforts as simplistic but she became America's most visible anti-drug crusader at a time when the crack cocaine epidemic was raging.

In 1988, she addressed the United Nations' General Assembly, saying the United States must do more with tougher law enforcement and anti-drug education efforts and should stop blaming the poor nations that produce most of the narcotics used by Americans.

"We will not get anywhere if we place a heavier burden of action on foreign governments than on America's own mayors, judges and legislators. You see, the cocaine cartel does not begin in Medellin, Colombia. It begins in the streets of New York, Miami, Los Angeles and every American city where crack is bought and sold," she told the General Assembly.

Mrs Reagan had her left breast surgically removed in October 1987 after a cancerous tumour was discovered.

She was born Anne Frances Robbins into a crumbling marriage in New York on July 6, 1921. Her car-salesman father deserted the family soon after, and her mother, actress Edith Luckett Robbins, resumed her show business career two years later.

In 1929, her mother married Loyal Davis, a neurosurgeon. Nancy came to adore him, even taking his name, and the doctor was believed to have had considerable influence on his eventual son-in-law's shift from Democrat to Republican years later.

After graduation from elite Smith College, she worked as a nurse's aide, then began a stage career in New York. Starting in 1949, she had an eight-year career in films including one -Hellcats of the Navy (1957) - co-starring with Ronald Reagan.

She often took supporting roles but had starring roles like one in the 1953 B-movie Donovan's Brain about a scientist who kept the brain of a dead millionaire alive in a tank.

Ronald Reagan divorced another actress, Jane Wyman, in 1948. They had a daughter, Maureen, and adopted a son, Michael.

At the time, Ronald Reagan headed the Screen Actors Guild. Davis was stunned when an industry newspaper published a list of communist sympathizers and her name was included (it turned out to be a reference to another actress of the same name). She sought out her future husband for assistance.

During the early years of the Cold War, Hollywood blacklisted - refused to employ - numerous people accused of holding communist views, ruining many careers and lives.

Ronald and Nancy Reagan got married in 1952 and had two children together - Patti Davis, an actress, and Ron Jr, who pursued careers in ballet and television.

I am saddened by the passing of my step mother Nancy Reagan...She is once again with the man she loved.God Bless...
...

Nancy Reagan will be remembered for her deep passion for this nation and love for her husband, Ronald. The Reagan family is in our prayers.

With the passing of Nancy Reagan, God and Ronnie have finally welcomed a choice soul home. https://t.co/NjiOBT9xoQ

Nancy Reagan was one of my heroes. She served as First Lady with unbelievable power, class and grace and left her mark on the world. (1/2)

Sad to learn of the passing of Nancy Reagan. She was a tremendous First Lady and a great American. My sympathy to the Reagan family.

Deeply saddened to learn of #NancyReagan's passing. She lived a beautiful, American story. Dave & I send our prayers to her family.

Whatever you think of Ronald Reagan's politics, his and Nancy's love story was beautiful. Ah, the age of letters. https://t.co/PJTVc2rLiB