Hermine has killed two people since striking the Florida coast as a hurricane on Friday before weakening to tropical-storm status as it moved northward off the US East Coast.

Its winds have since picked up, however, and the weather service said Sunday that it "is expected to be at or near hurricane strength during the next 48 hours." As of midday Sunday, Hermine was about 520 kilometres east-southeast of Ocean City, Maryland, in the mid-Atlantic region - far at sea, but close enough to be pummelling coastal areas with heavy rains, riptides and storm surges of up to 1.5 metres.

The storm, now heading north by northeast, is expected to take a northern or northwestern turn. Residents in states as far north as Connecticut are expected to feel its damaging impact.

The weather service said Hermine's current maximum sustained winds of 113 kilometres per hour would probably reach 121 kph - classifying it again as a category-one hurricane - between now and Tuesday morning. 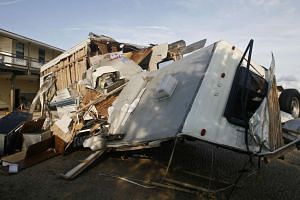 The storm's latest fatality occurred Saturday when heavy winds propelled an 18-wheel truck into a bridge railing in North Carolina, killing the unidentified driver, authorities told AFP. A homeless man was killed by a falling tree Friday in Florida.

Hermine was a hurricane when it slammed into Florida's Gulf of Mexico coast Friday, causing street flooding and power outages, the southeast state's first hurricane landfall since 2005.

Hermine, the fourth Atlantic hurricane of 2016, brought bad news for throngs of travellers hoping to enjoy beach time on the three-day Labour Day weekend, the unofficial end of the US summer vacation season.