One of the most unusual names floated is that of South Carolina Governor Nikki Haley, who according to CNN and MSNBC is under consideration for secretary of state and other posts.

Until now, US news outlets have reported that former New York mayor Rudy Giuliani was tipped for the job of top diplomat.

Media reports suggested Trump might have believed that the 72-year-old's controversial professional ties - which include lobbying for a Venezuelan oil firm - were too much to secure senate confirmation.

Haley, the daughter of Indian immigrants, originally supported Marco Rubio for president and differed with Trump on several issues, but she eventually came round to supporting the Republican nominee.

Retired general Michael Flynn is being considered for the role of national security adviser - a position that does not require senate confirmation, NBC News reported. 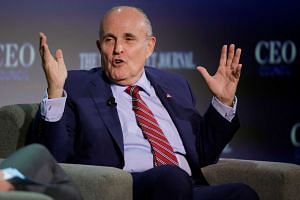 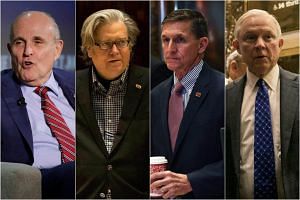 Flynn is one of the few national security experts who strongly supported Trump during the campaign.

Between 2012 and 2014, the 57-year-old headed the Defense Intelligence Agency but left under a cloud because of clashes with personnel and administration officials, US media reported.

Trump is expected to spend the day at his Manhattan headquarters, where he will meet a stream of potential new hires as well former Republican secretary of state Henry Kissinger, now 93.

In an interview with The Atlantic magazine following the vote, Kissinger said Trump could “establish coherence between our foreign policy and our domestic situation.”

There is “obviously a gap between the public’s perception of the role of US foreign policy and the elite’s perception,” said Kissinger, who served as secretary of state and head of the national security council in the 1970s.

During the evening, Trump will have his first appointment with a foreign leader when he meets Japanese Prime Minister Shinzo Abe.

Rick Perry - former governor of oil-rich Texas and one of the contenders that Trump crushed in the Republican primary - is being considered for energy secretary, The Wall Street Journal reported.

If it turns out to be true, the appointment is likely to raise eyebrows with many recalling an embarrassing moment during the 2011 Republican primary when he struggled to remember the third government agency he wanted to eliminate.

Perry said that when he became president "there'll be three agencies I'll end: commerce, education..." The moderator asked if he could name the third agency. "No," said Perry. "Oops." That agency was the Department of Energy.

Another finalist, according to the Journal, is Bill Hagerty for the post of US Trade Representative. Hagerty heads a private-equity investment firm and served as a senior economic development official in Tennessee.

And South Carolina Lieutenant Governor Henry McMaster is in talks for a possible job as attorney general, the state's leading newspaper, the Post and Courier, reported.

What makes the Trump administration unique is that when members leave government "they will be banned from being a registered lobbyist for five years," said Republican National Committee spokesman Sean Spicer.

This "goes back to Mr Trump's goal of making sure that people aren't using government to enrich themselves," Spicer told reporters late Wednesday.

Trump's team has sought to tamp down talk of turmoil amid widespread reports of a backstabbing purge of mainstream Republican aspirants.

"Putting together a federal government is a big task," his former campaign manager Kellyanne Conway told reporters. "It's false to say it's not going well. Everything up there is very smooth."

Trump rejected the negative reports on Twitter as "so totally wrong," and lashed out at The New York Times as "fools" for their transition coverage.

His appointment of the anti-establishment firebrand Stephen Bannon as his chief strategist, however, has rankled many Democrats.

Bannon - who played a central role in Trump's victorious campaign - is on leave as chairman of the Breitbart website, which critics say is a haven for white supremacists.

At least 169 House Democrats signed a letter demanding that Trump remove Bannon, saying his appointment "directly undermines your ability to unite the country."

Hillary Clinton made her first post-election appearance late Wednesday, telling a benefit event in Washington that although many were "deeply disappointed" by the election result, it was important to continue working for the greater good.

"Over the past week a lot of people have asked themselves whether America is the country we thought it was. The divisions laid bare by this election run deep, but please listen to me when I say this. America is worth it," she told the Children's Defense Fund event.

"I urge you: please don't give up on the values we share... even if it may not seem like it right now, there is common ground to build on."

Speaking to reporters as he left, the mayor said he had expressed concerns about the president-elect's proposed deportations of undocumented immigrants.

"I reiterated to him that this city and so many cities around the country will do all we can to protect our residents and to make sure that families are not torn apart," he said.

Thousands of anti-Trump protesters have flooded streets in several US cities during the past week.