MIAMI (REUTERS) - Engineers and state and university officials met hours before a newly built pedestrian bridge collapsed, killing six people, but concluded that a crack in the bridge was not a safety concern, Florida International University said on Saturday (March 17).

The two-hour meeting on Thursday involved FIGG, which is the private contractor for the overall design of the bridge, the school, Florida Department of Transportation officials and Munilla Construction Management (MCM), which installed the bridge.

A FIGG engineer "concluded there were no safety concerns and the crack did not compromise the structural integrity of the bridge," FIU said in a statement on Saturday.

About three hours after the meeting concluded, the 950-tonne, US$14.2 million bridge fell down, crushing vehicles stopped at a traffic light on the eight-lane roadway below.

At least six people, including three whose bodies were recovered on Saturday, were killed.

Police said four vehicles are believed to be still under the collapsed bridge and more bodies may be recovered from the rubble.

The victims found on Saturday were identified as Rolando Fraga Hernandez, Oswald Gonzalez and Alberto Arias, the Miami-Dade Police Department said in a statement. Police identified a fourth victim who died in hospital as Navarro Brown.

News of the meeting followed a revelation late on Friday that the engineer overseeing the bridge, which linked the FIU campus with the city of Sweetwater, had called a state official two days before the collapse to report cracks. 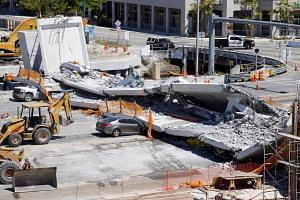 However, the voicemail message from FIGG's lead engineer Denney Pate, including his assertion that the cracking posed no safety issue, was not retrieved until Friday, a day after the tragedy, according to the state transportation agency.

Pate did not immediately respond to email queries from Reuters.

In the message, Pate said his team had observed "some cracking" at one end of the bridge and that repairs were warranted, "but from a safety perspective we don't see that there's any issue there, so we're not concerned about it from that perspective."

He added: "Obviously the cracking is not good and something's going to have to be, ya know, done to repair that."