WASHINGTON (WASHINGTON POST) - When the Pentagon last chose a new chairman of the Joint Chiefs of Staff, it was rattled by a last-minute surprise: A corrupt defence contractor known as "Fat Leonard" confided to federal agents that he had an unsavoury past with one of the finalists to become the nation's top military officer.

Leonard Glenn Francis, a maritime tycoon who had recently pleaded guilty to bribing navy officers, told authorities in early 2015 that he had paid for opulent dinners and other favours for Admiral Samuel Locklear, then-commander of US military forces in the Pacific, according to previously undisclosed documents and six people familiar with the case.

Francis also shared with investigators several photographs of him drinking and socialising with Adm Locklear, who was one of four contenders to head the Joint Chiefs.

Some photos were from a banquet in Singapore that Francis had hosted for the admiral and other Navy officers that featured prostitutes as entertainment, according to the documents and people familiar with the case.

Adm Locklear told The Washington Post that he was at the party, but was unaware of any prostitutes, and he said he had limited contact with Francis over the years.

After separate investigations, the Justice Department declined to press charges, and the navy cleared the four-star admiral of wrongdoing.

But his association with the 159kg contractor helped sink his chances to lead the Joint Chiefs, other documents show.

Now retired, Adm Locklear is the highest-ranking officer known to have been investigated in what has become the worst corruption scandal in US navy history.

When the still-unfolding scandal became public in 2013, navy leaders promised transparency and accountability as they vowed to purge crooked officers from the ranks.

Since then, however, the navy has kept most details of its investigations a secret, including the allegations surrounding Adm Locklear and hundreds of other officers.

The Washington Post confirmed Adm Locklear's involvement through interviews and documents obtained under the Freedom of Information Act.

The Justice Department has filed criminal charges against 29 defendants who worked for the navy or Francis's company, Glenn Defence Marine Asia. But those represent only a fraction of the people swept up in the scandal.

Separately, the Justice Department has provided the Navy with dossiers on 550 people who had contact with Francis - including about 60 admirals - to determine whether they violated military law or ethics rules. 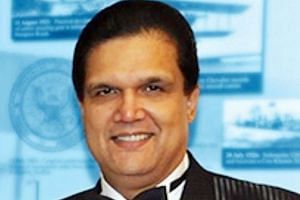 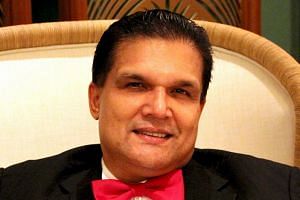 Case of Singapore-based contractor 'Fat Leonard', who cheated the US Navy, continues to expand

Who is 'Fat Leonard'?

The navy has publicly identified only 11 individuals who have been charged under military law or who committed misconduct.

Navy officials decide whether to release the names of offending officers "on a case-by-case basis", according to a statement from Commander Mike Kafka, a navy spokesman.

The navy also has refused to disclose how many people it has kicked out of the service for taking bribes or gifts from Francis.

"The navy is committed to being transparent, but we must balance transparency with maintaining the integrity of the ongoing investigations," Cmdr Kafka said.

Francis' Singapore-based company held lucrative contracts to resupply navy vessels in the Pacific for more than a quarter-century. He has confessed to swindling the navy out of US$35 million (S$45.89 million) and bribing scores of officers.

He remains in federal custody while he awaits sentencing. One of his attorneys, Mr Ethan Posner, declined to comment on his behalf.

On Jan 15, 2015, Francis pleaded guilty in federal court in San Diego and agreed to cooperate with investigators.

During confidential meetings, he told federal agents he met Adm Locklear in September 2003 when the admiral was commander of the USS Nimitz aircraft carrier strike group.

That month, during a port visit by the Nimitz to Singapore, Francis hosted a "lavish" dinner for Adm Locklear, several other officers and their wives, Navy records show.

The next month, the Nimitz returned to Singapore for another visit - and more hospitality from Francis.

On Oct 9, 2003, he invited Adm Locklear and two dozen officers - this time without their wives - for a seven-course dinner on the 70th floor of the Swissotel Stamford, according to documents obtained by The Washington Post.

Francis later told federal agents that as the dinner was winding down, he escorted Adm Locklear to a hotel room, according to two of the people familiar with the investigation but not authorised to speak publicly about it.

Waiting inside, on a king-size bed, was a Chinese prostitute whom the contractor had hired and selected for the admiral, according to the account Francis gave the agents.

In a letter to The Post, Adm Locklear confirmed attending the dinner, which he said included "some dancing, lots of picture taking, and nothing inappropriate".

He said he was the first to leave and headed directly back to the Nimitz.

He denied the allegation that Francis provided him with a prostitute.

"Any assertions he may have made along these lines are false," he wrote."It is inconceivable to me, as it is to others who know me, that I would engage in such activity, no matter the circumstances," Adm Locklear added.

"So once again let me be clear: I was never offered a prostitute by Leonard Francis. I never requested a prostitute from him, and I never discussed prostitutes or escorts with him. If there were prostitutes... they did not present themselves to me as such and I had no reason to suspect they were."

Another navy officer who attended the banquet told The Post it was obvious Francis had hired prostitutes to provide entertainment.

"I can tell you right now for a fact that I was standing there talking... when the doors opened and Fat Leonard brought in the girls," said Mr David Fravor, a since-retired fighter pilot who served on the Nimitz. "There were probably about 15 girls, at least, who barged in."

But Mr Fravor said he, Adm Locklear and a few other officers left the room immediately.

"I can tell you 100 per cent, I have absolutely no doubt that I watched Sam Locklear and his aide walk out as soon as the hookers came in the room," he said. "They walked out, shook Leonard's hand, said 'thank you' and left."

In his letter to The Post, Adm Locklear said he had obtained "legal reviews" clearing him to attend both dinners.

One of his attorneys, Mr Stanley Pottinger, said that there was no written record of the legal reviews, but that the admiral's chief of staff had recommended he attend the events and verbally assured him they posed no ethical problems.

Heavily redacted navy documents mention the presence of sex workers at the banquet, quoting an unnamed navy official who reported that "females of Chinese descent" who were "probably prostitutes" handed out "lots of good cigars".

Other records, filed last year in federal court by Justice Department officials,also assert that Francis hired prostitutes for the Oct 9, 2003, dinner in Singapore.

Gilbeau pleaded guilty to lying about his contacts with Francis. He is serving an 18-month prison sentence and did not respond to a letter seeking comment.

The investigations into Adm Locklear intensified in early 2015 as he came under strong consideration to become the next chairman of the Joint Chiefs.

Then-Defence Secretary Ashton Carter had settled on a shortlist of Adm Locklear and three other finalists, according to a March 30, 2015, e-mail from a White House official that was made public by WikiLeaks.

Mr Kirchhoff said that Mr Carter was slated to decide within days whom he would recommend for the Joint Chiefs job, but that no clear front-runner had emerged.

Mr Kirchhoff noted Adm Locklear's chances had dimmed because of his ties to Francis. He said the admiral "may drop from the slate absent Ash's extraordinary intervention because as soon as the Fat Leonard (investigation) pops, Locklear will be forced to retire".

He added that Mr Carter's staff was "doubtful they could keep Locklear in play".

Mr Carter declined to comment. In an interview with The Post, Mr Kirchhoff said he knew "for a fact that Ash was undecided and was really wrestling with the decision".

The navy verified that Adm Locklear attended the two banquets in Singapore in 2003 that were paid for by Francis' company, documents show.

They do not reveal how much the dinners cost, but Francis often spent between US$700 and US$1,000 per person to wine and dine officers, according to other Navy records.

In an April 27, 2015, memo, Admiral John Richardson - now the Navy's top admiral - acknowledged that Adm Locklear's acceptance of the two meals would normally violate federal ethics rules, which forbid taking gifts worth more than US$20 from contractors.

But Adm Richardson cleared Adm Locklear of wrongdoing, concluding in his memo that "it would be inappropriate to substantiate allegations of misconduct... in regards to these dinners, or any other matters".

Cmdr Kafka, the navy spokesman, said Adm Locklear's candidacy for the Joint Chiefs chairmanship did not influence how the navy handled the case.

About a week later, the White House chose someone else to lead the Joint Chiefs: Marine General Joseph Dunford, who still holds the job.

The following month, Adm Locklear retired from the military.