(NYTIMES) - Chinese students have become a significant part of American college life, but they generally have shied away from the political activism of many of their classmates.

Some of them, indeed, embrace the party line of the Chinese government, joining student organisations closely aligned with their local consulates.

So it was all the more unusual when posters began appearing at several colleges this week in protest of a proposal in Beijing that would let China's president, Xi Jinping, serve indefinitely.

"NeverMyPresident" said the poster that Longxiao Li, 24, put up Thursday in the library at New York University's MetroTech campus in Brooklyn. The words were superimposed over a face of Xi, and were a reference, Li said, to the lack of democratic elections in China.

"The Chinese Communist Party is an authoritarian dictatorship," Li, 24, a graduate student in game design from Shenzhen, said in a telephone interview Friday. "He's never been my president. No one ever elected him." With a vote scheduled for Sunday in the National People's Congress to remove presidential term limits, the small campus protests seemed unlikely to cause even a ripple in China. But it was a reflection of simmering dissent among Chinese citizens, and of a willingness to speak out publicly by those outside the reach of government censors.

Li said he felt an obligation to take action, despite possible repercussions if he returned home, after learning of a similar protest at the University of California, San Diego, that has also spread to other campuses, and of an accompanying Twitter campaign.

The Twitter handle - @stopxijinping - was started March 1 and had gained more than 1,350 followers by the end of the week as well as a retweet by the office of Senator Marco Rubio, which called it a "bold move". Efforts to reach the people behind that campaign were unsuccessful.

The Twitter account, along with others, posted photographs of posters spotted at American universities including Arizona State, Connecticut, Georgia, Emory, Indiana University-Purdue University Indianapolis, and Syracuse in New York; and overseas schools including the London School of Economics, Australian National University and the Chinese University of Hong Kong.

The number of Chinese students in the United States has exploded over the past 15 years, as American colleges have tapped into China's ascendant upper class as a major source of revenue. They are by far the largest contingent of international students, with more than 300,000 studying in the United States every year. 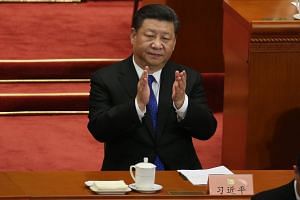 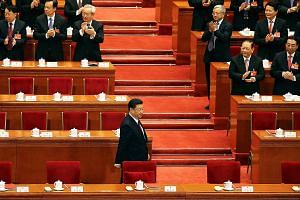 But despite a prevailing silence on political matters, they are not a monolithic group. Those who openly joined the protest last week include Sulaiman Gu, a Ph.D. candidate in chemistry at the University of Georgia who identifies as a dissident and a Hui, a Muslim ethnic minority. He is involved in a group called the Independent Federation of Chinese Students and Scholars, a spinoff of the Chinese Students and Scholars Association, a Beijing-sanctioned organization with chapters on about 150 campuses nationally.

Students at the University of California, San Diego, said they had spotted posters this week at the Price Centre, a student centre and food court. An English-language version was still up on Friday, but a Chinese version had been removed, according to Charlie Vest, a graduate student in Chinese economic and political affairs. In the past, pro-Beijing students in the United States have mounted counterprotests against students or speakers, like the Dalai Lama, who openly criticise or are seen as threats to the government.

How broadly the protests were spreading at each college was unclear. Shiwei Terry Zhou, a senior at UC San Diego from Wuhan, said that while some posters had been placed on the campus, he did not think the campaign was having much influence. "Most students are not anti-Xi as far as I know (they really just don't care)," he said via a Facebook message.

Perry Link, a China scholar at the University of California, Riverside, said that such activism was more common immediately after the 1989 Tiananmen Square protests, after which Congress passed a law letting any Chinese student who feared retribution upon return to China to apply immediately for US residency.

"This rule actually became an incentive for students to speak out, since many were hoping to get green cards in any case," Link said. "But in recent years the external incentives have been powerfully in the opposite direction," he said, making it unusual for Chinese students in the United States to protest.

In an interview Friday with Radio Free Asia, a US-funded news service focused on Asian countries, Li, speaking in Mandarin, said he believed he had an obligation to make a difference. He argued that one-party rule was not only doing harm to China, but also was threatening the free world, as China was now exporting the ideology that "authoritarianism is better than democracy". Li, who earned a bachelor's degree from Ohio State University before enrolling at NYU, said later that while he had heard many Chinese students in the United States expressing their objections to the removal of term limits, only a few were willing to speak out publicly. "I don't think many Chinese students are aware of this movement," he said.