WASHINGTON (AFP) - The viral spread of hoaxes and misinformation ahead of the US election and Brexit referendum two years ago was a wake-up call for many established news media, who have gone on the offensive to shore up their credibility and help filter out fake news.

Major media organisations, often in partnership with big technology and social media firms, have stepped up fact-checking and other steps to support fact-based journalism.

But these efforts have been complicated by unrelenting attacks on the media by US President Donald Trump and others who tend to label any unfavourable coverage "fake news".

Fake news is as old as journalism itself, and reputable media organisations have often played a role of "gatekeeper" to reliable information.

This role has been fundamentally challenged in the fast-moving Internet age when rumours and false information can become viral, sometimes with tragic results.

In one chilling example in India, a WhatsApp rumour warning that 300 people had descended on Gujarat looking to abduct and sell children has triggered deadly mob attacks.

Social media "has made things much worse", because it "offers an easy route for non-journalists to bypass journalism's gatekeepers, so that anyone can 'publish' anything, however biased, inaccurate or fabricated", says Dr John Huxford, an Illinois State University journalism professor.

"Journalism's role as the 'gatekeeper' of what is and isn't news has always been controversial, of course. But we're now seeing just how bad things can get when that function breaks down." 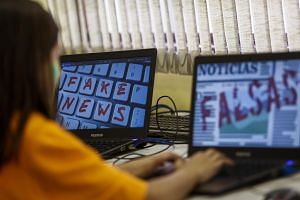 Concerned about impact of misinformation on the young, Brazil fights fake news in the classroom 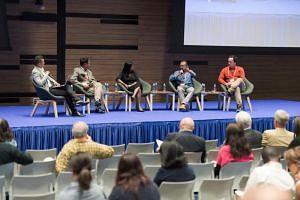 Asian push to crack down on 'fake news' sparks alarm

Internet firms, after initial reluctance to define themselves as media, have stepped up efforts to identify false news and to curate stories from trusted news sources.

"Technology companies including Apple, Google, Snapchat, Twitter, and, above all, Facebook have taken on most of the functions of news organisations, becoming key players in the news ecosystem, whether they wanted that role or not," said a March 2018 report by Columbia University's Tow Centre for Digital Journalism.

"False political news travelled deeper and more broadly, reached more people, and was more viral than any other category of false information," said a report this year from the Massachusetts Institute of Technology.

"Analysis found that it took the truth approximately six times as long as falsehood to reach 1,500 people," the researchers said.

Oxford Internet Institute scholars came to a similar conclusion, pointing out that on many online platforms, news is "prioritised by complex algorithms that have been coded to sort, filter, and deliver content in a manner that is designed to maximise users' engagement", according to a study.

"The speed and scale at which content 'goes viral' grows exponentially, regardless of whether or not the information it contains is true," wrote Oxford researchers Samantha Bradshaw and Philip Howard.

Dr Huxford said many Internet users are not adept at telling fake news from the real thing, making the role of major news organisations critical.

"This is why Trump falsely labelling the mainstream media as 'fake news' is so toxic," he said.

"It means that, at a time when there is a lot of fabrication and falsehoods swirling through the system, the credibility of the most reliable sources of news is being undermined."

There have been some hopeful signs for news media, such as increased digital subscriptions for the New York Times and Washington Post. But many legacy organisations such as local newspapers are struggling with a shift to digital platforms.

Journalists may face new dangers in the current environment, in some cases subject to attacks by political leaders even when trying to debunk false information.

In Brazil, the fact-checking organisations Lupa and Aos Fatos, which have partnered with Facebook to curb fake news, have faced threats and harassment, with some groups accusing them of ideological bias.

The Philippine government, meanwhile, revoked the licence of website Rappler, which has also joined fact-checking efforts against President Rodrigo Duterte.

The United States has broad constitutional protection for the press, but some say Mr Trump's attacks are having an impact.

After the deadly attack on a newsroom in Annapolis, Maryland, one prominent writer suggested that Mr Trump's posture laid the groundwork for violence against journalists.

"He calls us the enemy of the people, he says that we are unpatriotic, that we do not love our country, and we're surprised when someone picks up a gun to kill us?" said Washington Post columnist Jennifer Rubin in an HBO interview.

As fake news has extended its global reach, so has fact-checking - with some 149 initiatives now running in 53 countries, according to the Duke University Reporters Lab.

Facebook has established fact-checking partnerships with 25 organisations, including Agence France-Presse, in 14 countries, to stem the spread of misinformation.

Yet even fact-checking has its limits, and some people will remain committed to believing false information regardless of verification efforts, studies show.

In late 2016, a gunman fired shots in a Washington pizza restaurant based on the erroneous belief it was the location of a child sex ring involving Mrs Hillary Clinton. And 51 per cent of Republican voters said in a recent survey they believed former president Barack Obama was born in Kenya - another widely-shared fallacy.

A Pew Research Centre survey released last year found two-thirds of US adults say fabricated news stories cause a great deal of confusion about the basic facts of current issues and events.

The survey also found that 23 per cent said they had shared a fake news story, with nearly half of those saying they knew it was false at the time.