SAN FRANCISCO (REUTERS) - Facebook on Tuesday (Sept 24) said it would not take down politicians' posts that violate its community standards and will not label them as rival Twitter has promised, saying it should not be the arbiter of acceptable speech in the political arena.

Social media platforms are under pressure to block election interference and be more transparent about policies on political content, after what United States authorities called an extensive cyber influence campaign by Russia aimed at helping elect President Donald Trump in 2016. Moscow has denied the claims.

Facebook will take down posts if a politician's content has the potential to incite violence or pose a safety risk that outweighs the public interest value. And political advertisements must still meet Facebook's rules.

The kinds of posts from politicians that could be kept up might include cruel or insensitive comments or graphic content.

Facebook head of global affairs Nick Clegg announced the stance in a speech in Washington, DC on the social media giant's preparations for the US presidential election in November 2020.

"Would it be acceptable to society at large to have a private company in effect become a self-appointed referee for everything that politicians say?" Mr Clegg asked. "I don't believe it would be."

The comments follow Twitter's announcement in June that it would identify and de-emphasise tweets that broke its rules but were posted by important sources, such as politicians and government officials. 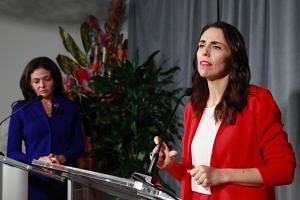 Facebook says it has suspended 'tens of thousands' of apps

If flagged, a notice would cover the offending tweet and require a user to click on a link to view it.

Mr Clegg, who was previously Britain's deputy prime minister, also said Facebook did not submit original content from politicians to its independent fact-checkers. It will only demote and label previously debunked content that is shared by politicians.

Facebook's third-party fact-checking programme, which is used to label and de-emphasise false content, has been a centrepiece of its fight against disinformation.

A Facebook spokesman said the global policy would apply to politicians at the executive, national and regional levels, including candidates for office.

Facebook's stance on politicians' content builds on its policy, in place since 2016, to leave up content whose public interest it considers to outweigh the risk of harm.