Evaldas Rimasauskas, 50, pleaded guilty to one count of wire fraud before US District Judge George Daniels on Wednesday (March 20) under an agreement with prosecutors, and will forfeit US$49.7 million.

Rimasauskas was extradited to New York in August 2017. He faces as many as 30 years in prison when he is sentenced on July 24.

Prosecutors alleged that Rimasauskas, along with some unidentified co-conspirators, helped orchestrate a scheme in which fake e-mails were sent to employees and agents of the two tech giants.

The thieves pretended to represent Taiwanese hardware maker Quanta Computer. They told Facebook and Google workers that the companies owed Quanta money, and then directed payments be sent to bank accounts controlled by the scammers.

"Rimasauskas thought he could hide behind a computer screen halfway across the world while he conducted his fraudulent scheme, but as he has learnt, the arms of American justice are long, and he now faces significant time in a US prison," US Attorney Geoffrey Berman in Manhattan said in a statement.

Dressed in tan prison clothing and speaking in Russian through a translator, Rimasauskas told the judge he took part in the fraud scheme from October 2013 to October 2015, posing as a Quanta employee, creating fake bank accounts in Latvia and Cyprus to receive the scammed proceeds, and signing fake contracts and documents that were submitted to banks to support the wire transfers.

"I fully understood that my actions were fraud," Rimasauskas said. 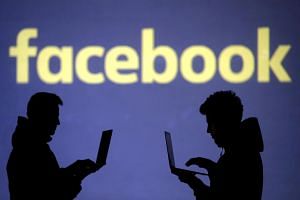 Mr Daniels asked Rimasauskas why the victims wired the money and whether they were promised anything in return.

"I'm not sure 100 per cent because I was asked to open bank accounts," Rimasauskas said. "After that I did not do anything with these accounts."

Assistant US Attorney Eun Young Choi told the judge that prosecutors do not allege that Rimasauskas was the one who directly induced the companies to send the money.

"He created the infrastructure to further the fraudulent transfers," Ms Choi said.

The scheme netted about US$23 million from Google in 2013 and about US$98 million from Facebook in 2015, according to a person familiar with the case, who asked not to be named because the companies have not been publicly identified by prosecutors as the victims.

Google said in a statement that it detected the fraud, promptly alerted the authorities and has recouped the funds.

Facebook also said in a statement: "Facebook recovered the bulk of the funds shortly after the incident and has been cooperating with law enforcement in its investigation."