WASHINGTON (AFP) - The former Trump campaign aide whose Russia contacts set off the investigation over collusion in the 2016 US presidential election began a two-week jail sentence on Monday (Nov 26) over lies he told to the FBI.

George Papadopoulos entered the minimum security unit of the Oxford, Wisconsin, federal prison more than one year after pleading guilty in one of the first cases brought by Special Counsel Robert Mueller, the Bureau of Prisons confirmed.

He was the second figure in the Mueller probe to be sentenced to jail, after Alex Van Der Zwaan, a London lawyer who got 30 days for lying about his work with Paul Manafort, chairman of Donald Trump's presidential campaign in 2016.

Manafort meanwhile faces more than a decade in jail when he is sentenced in February on multiple charges related to money laundering and illegal lobbying.

Papadopoulos was an obscure oil industry analyst when he joined the Trump campaign's foreign policy advisory team in March 2016.

Based in London, he made contacts with what he believed were important Russian and Russia-linked officials, who through him offered the Trump campaign a meeting between candidate Trump and Russian President Vladimir Putin.

After an allegedly drunken Papadopoulos related the conversation to an Australian diplomat who passed the information on through intelligence channels, the Federal Bureau of Investigation opened a probe into contacts between the Trump campaign and Russia. 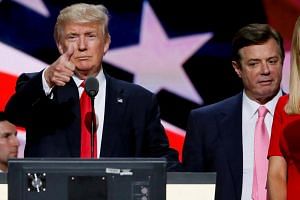 E-mails and testimony by other witnesses showed that Papadopoulos had repeatedly reported his Russia contacts and meetings to the Trump campaign, raising suspicions of collusion.

One week after Mr Trump took office in January 2017, the FBI interviewed Papadopoulos. During that interview, he lied about his contacts, including with Mifsud, according to federal charges.

On Oct 5, 2017, he pleaded guilty and pledged to cooperate with the probe.

At the time, Mr Trump branded him a "young, low-level volunteer named George, who has already proven to be a liar".

He was sentenced on Sept 7 this year after expressing his remorse that he "lied in an investigation that was important to national security".

But immediately after that, Papadopoulos declared he had been entrapped by US and foreign intelligence services and alleged that Mifsud was a CIA operative who was part of a broader campaign to damage Mr Trump.

"I was framed in many ways," he said in an interview last month with Fox News, calling his Russia contacts "completely orchestrated".

He tried to delay his prison sentence, claiming in a court filing that the Mueller investigation was illegal, a claim Mr Trump himself has made.

On Sunday, a judge rejected that last-ditch move.