WASHINGTON (WASHINGTON POST) - Some 115,000 years ago, homo sapiens were still living in bands of hunter gatherers, largely confined to Africa. We still shared the globe with the Neanderthals, although it's not clear we had met them yet.

And though these various hominids didn't know it, the Earth was coming to the end of a major warm period. It was one that's quite close to our current climate, but with one major discrepancy - seas at the time were 20 to 30 feet higher.

During this ancient period, sometimes called the Eemian, the oceans were about as warm as they are today. And last month, intriguing new research emerged suggesting that Northern Hemisphere glaciers have already retreated just as far as they did in the Eemian, driven by dramatic warming in Arctic regions.

The finding arose when a team of researchers working on Baffin Island, in northeastern Canada, sampled the remains of ancient plants that had emerged from beneath fast-retreating mountain glaciers. And they found that the plants were very old indeed, and had probably last grown in these spots some 115,000 years ago.

That's the last time the areas were actually not covered by ice, the scientists believe.

"It's very hard to come up with any other explanation, except that at least in that one area where we're working ... the last century is as warm as any century in the last 115,000 years," said Gifford Miller, a geologist at the University of Colorado in Boulder who led the research on Baffin Island.

But if Miller is right, there's a big problem. We have geological records of sea levels from the Eemian. And the oceans, scientists believe, were 20 to 30 feet higher.

Some extra water likely came from Greenland, whose ice currently contains over 20 feet of potential sea level rise. But it couldn't have been just Greenland, because that entire ice sheet did not melt at the time.

That's why researchers also suspect a collapse of the most vulnerable part of Antarctica, the West Antarctic ice sheet.

This region could easily supply another 10 feet of sea level rise, or more. 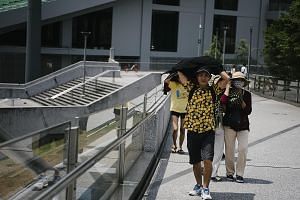 Fire & ice: How the poles affect tropical climates like Singapore's

Scientists are now intensely debating precisely which processes could have played out then - and how soon they'll play out again. After all, West Antarctica has already been shown, once again, to be beginning a retreat.

Some researchers, including DeConto, think they have found a key process - called marine ice cliff collapse - that can release a lot of sea level rise from West Antarctica in a hurry. But they're being challenged by another group, whose members suspect the changes in the past were slow - and will be again.

To understand the dispute, consider the vulnerable setting of West Antarctica itself. Essentially, it's an enormous block of ice mostly submerged in very cold water. Its glaciers sit up against the ocean in all directions, and toward the center of the ice sheet, the seafloor slopes rapidly downward, even as the surface of the ice sheet itself grows much thicker, as much as two miles thick in total.

As much as a mile and a half of that ice rests below the sea level, but there is still plenty of ice above it, too.

So if the gateway glaciers start to move backward - particularly a glacier named Thwaites, by far the largest of them - the ocean would quickly have access to much thicker ice.

The idea is that during the Eemian, this whole area was not a block of ice at all, but an unnamed sea. Somehow, the ocean got in, toppling the outer glacial defenses, and gradually setting all of West Antarctica afloat and on course to melting.

DeConto, with his colleague David Pollard, built a model that looked to the Eemian, and another ancient warm period called the Pliocene, to try to understand how this could happen.

In particular, they included two processes that can remove glaciers. One, dubbed "marine ice sheet instability," describes a situation in which a partially submerged glacier gets deeper and thicker as you move toward its center. In this configuration, warm water can cause a glacier to move backward and downhill, exposing ever thicker ice to the ocean - and thicker ice flows outward faster.

So the loss feeds upon itself.

Marine ice sheet instability is probably underway already in West Antarctica, but in the model, it wasn't enough. DeConto and Pollard also added another process that they say is currently playing out in Greenland, at a large glacier called Jakobshavn.

Jakobshavn is moving backward down an undersea hill slope, just in the way that it is feared the much larger Thwaites will drift. But Jakobshavn is also doing something else. It is constantly breaking off thick pieces at its front, almost like a loaf of bread, dropping slice after slice.

That's because Jakobshavn no longer has an ice shelf, a floating extension that used to grow out over the ocean at the front of the glacier and stabilise it. The shelf collapsed as Greenland warmed in the past two decades.

As a result, Jakobshavn now presents a steep vertical front to the sea. Most of the glacier's ice is under the water, but more than 100m extend above it - and for DeConto and Pollard, that's the problem. That's too much to be sustained.

This additional process, called "marine ice cliff collapse," causes an utter disaster if you apply it to Thwaites. If Thwaites someday loses its own ice shelf and exposes a vertical front to the ocean, you would have ice cliffs hundreds of meters above the surface of the water.

DeConto and Pollard say that such cliffs would continually fall into the sea. And when they added this computation, it not only recreated Eemian sea level rise, it greatly increased their projection of how much ice Antarctica could yield in this century - more than three feet.

Since there are other drivers of sea level rise, like Greenland, this meant that we could see as much as six feet in total in this century, roughly double prior projections. And in the next century, the ice loss would get even worse.

On thin ice: Changes in the Arctic and why they are cause for concern

"What we pointed out was, if the kind of calving that we see in Greenland today were to start turning on in analogous settings in Antarctica, then Antarctica has way thicker ice, it's a way bigger ice sheet, the consequences would be potentially really monumental for sea level rise," DeConto said.

Moreover, the process, he argues, is essential to understanding the past - and thus how we could replicate it. "We cannot recreate six metres of sea level rise early in the Eemian without accounting for some brittle fracture in the ice sheet model," said DeConto.

Tamsin Edwards is not convinced. A glaciologist at Kings College London, she is lead author - with a number of other Antarctic experts - of a study published Wednesday in Nature (the same journal that published DeConto and Pollard in 2016) that disputes their model, in great detail.

Using a statistical technique to examine the results, Edwards and her collaborators find that the toppling of ice cliffs is not necessary to reproduce past warm periods after all. They also present lower sea level rise possibilities from Antarctica in this century.

If they're right, the worst case is back down to about 40cm, or a little over a foot, rather than three to four feet. "Things may not be as absolutely terrible as that last study predicted," Edwards said. "But they're still bad."

It is a new science, she said, and without more modeling it's unclear how ice cliffs will ultimately affect sea level rise.

But then what happened in the Eemian? Edwards thinks it just took a long time to lose West Antarctica. That it wasn't fast. After all, the entire geologic period was thousands of years long. "We're an impatient lot, humans, and the ice sheets don't respond in a decade, they're slow beasts," she said.

DeConto says he's learned something from the critique. "The Edwards study does illustrate the need for more in-depth statistics than we originally applied to our 2016 model output, but the models are evolving rapidly and they have already changed considerably since 2016," he said in a written statement.

But he's not backing down on marine ice cliffs. The new critique, DeConto said, implies that "these processes aren't important for future sea level rise. And I think to me, that's kind of a dangerous message." He certainly has his allies.

Richard Alley, a well known glaciologist at Penn State University who has published with DeConto and Pollard, wrote in an email that "cliff retreat is not some strange and unexpected physical process; it is happening now in some places, has happened in the past, and is expected wherever sufficiently high temperatures occur in ocean or air around ice flowing into the ocean."

There's one important thing to consider - the Eemian occurred without humans emitting lots of greenhouse gases. Atmospheric carbon dioxide was far lower than it is today. The event was instead driven by changes in the Earth's orbit around the sun, leading to more sunlight falling on the northern hemisphere.

The big difference, this time around, is that humans are heating things up far faster than what is believed to have happened in the geologic past.

And that makes a key difference, said Ted Scambos, an Antarctic researcher who is leading the US side of an international multimillion dollar mission to study Thwaites Glacier, and who is a senior researcher at the National Snow and Ice Data Centre in Colorado.

"The current pace of climate change is very fast," Scambos said, and the rate of warming might cause glaciers to behave differently than they did in the past.

Accordingly, Scambos says he sees the current debate as fruitful - "it's the discussion that needs to happen" - but that it doesn't lessen his worry about the fate of Thwaites Glacier if it retreats far enough.

"There's no model that says the glacier won't accelerate if it gets into those conditions," said Scambos. "It just has to."

Humans were nowhere near the Antarctic in the Eemian - and we have never, in the modern period, seen a glacier as big as Thwaites retreat. It's possible something is going to happen that we don't have any precedent or predictions for.

Just last week, for instance, scientists reported a large cavity opening beneath one part of the glacier - something they said models could not have predicted.

There is a massive stake involved now in at least trying to figure out what could happen - before it actually does. It will help determine whether humans, now organised and industrialised and masters of fossil fuels, are poised to drive a repeat of our own geological history.