WASHINGTON (REUTERS) - US President Donald Trump on Monday (Feb 26) urged governors not to be afraid of the nation's most powerful gun lobby as they seek to beef up school safety after last week's deadly mass shooting in Parkland, Florida.

Trump has embraced the National Rifle Association's (NRA) call to safeguard schools by arming teachers, but he also has voiced support for strengthening background checks for prospective gun buyers - a proposal the politically powerful NRA has traditionally resisted.

"Don't worry about the NRA. They're on our side," Trump told more than 35 governors, including Rick Scott of Florida, during a White House meeting. "If they're not with you, we have to fight them every once in awhile. That's OK. They're doing what they think is right."

The long-simmering national debate between proponents of gun rights and advocates of firearms controls was reignited by the Feb 14 massacre at Marjory Stoneman Douglas High School in Parkland, an affluent suburb of Fort Lauderdale.

The 14 students and three adult educators killed were shot with a semiautomatic AR-15-style assault weapon, which authorities say was purchased legally last year by the accused gunman, Nikolas Cruz, when he was 18 years old.

Cruz, now 19, a former Stoneman Douglas student who authorities say had a history of run-ins with the law and was expelled from school for disciplinary problems, has been charged with 17 counts of premeditated murder.

Trump, a Republican who backed gun rights during and since his 2016 presidential campaign, has been under pressure to show he is responding without alienating Republicans who oppose firearms restrictions. He plans to meet with lawmakers from both parties to discuss possible legislation on Wednesday, White House press secretary Sarah Sanders told reporters.

Trump had last week said he wanted to raise the legal minimum age for buying an assault rifle to 21. But on Monday - a day after he had lunch with three senior NRA officials - he failed to mention the idea in the school safety plans he discussed with governors.

The NRA has opposed higher minimum ages for purchasing guns. The White House said on Monday that Trump was still looking at details of such a measure. The NRA could not be reached for immediate comment. 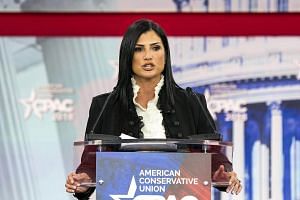 US gun lobby pushes back on Trump's plans after Florida shooting 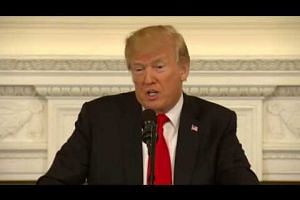 Trump did express support for bolstering the nation's system of background checks for gun buyers to better keep guns out of the hands of criminals and the mentally disturbed.

That could be an uphill battle, particularly heading into congressional elections in November.

Past bipartisan pushes to fix gaps in the background check system after other tragic mass shootings have floundered in the US Congress, and some Republican senators have already expressed concerns about renewed efforts.

An attempt by Senate leadership on Monday to quickly consider a Bill and bypass time-consuming procedural steps was blocked by Republican Senator Mike Lee of Utah.

Senator John Kennedy from Louisiana told reporters that he wants to ensure people flagged as ineligible to buy guns have the right to appeal.

"We're trying to work on language to say that if they're going to send your name in, you've got to be notified first," said Kennedy, noting people with common names could face problems.

Trump told governors that he believes arming trained teachers is the most cost-effective way to protect students and deter would-be shooters.

Washington Governor Jay Inslee, a Democrat, told Trump that teachers in his state do not want to carry weapons.

But Texas Governor Greg Abbott, a Republican, said more than 100 school districts in his state have trained teachers and other staff to carry a weapon and respond to attacks.

"Some school districts, they promote it," Abbott said. "They will have signs out front, a warning sign, 'Be aware there are armed personnel on campus.'"

Florida plans to invest US$500 million (S$658 million) to have a significant law enforcement presence in every public school in the state, Scott told the governors meeting.

TRUMP SAYS WOULD HAVE RUN IN

Trump also lashed out at some of the law enforcement officers who were first to arrive at the school.

"The way they performed was, frankly, disgusting," Trump said of reports that some deputies hesitated to go after the gunman. He added that he believed that if he were in the same situation, he would have run into the school "even if I didn't have a weapon."

An armed sheriff's deputy who was assigned as the school resource officer resigned rather than face suspension. He was found to have stayed outside the building during the attack instead of going in to confront the gunman, according to Broward County Sheriff Scott Israel.

Trump has called the deputy, Scot Peterson, a "coward."

An attorney for Peterson defended his actions in a statement, saying he had remained outside because he believed the gunfire was occurring outside the school.

"Allegations that Mr. Peterson was a coward and that his performance, under the circumstances, failed to meet the standards of police officers are patently untrue," attorney Joseph DiRuzzo said in a statement.

Investigators are also looking into reports from the neighbouring Coral Springs Police Department that three other sheriff's deputies who were outside the school during or just after the shooting failed to enter immediately.

Moreover, Israel has acknowledged his investigators are examining whether his office mishandled two telephone tips in 2016 and 2017 that warned Cruz was collecting weapons and might be inclined to commit a school shooting.

Israel, a Democrat first elected sheriff in 2012, has come under sharp criticism from 74 Republican state lawmakers calling for him to be removed or suspended from office.