WASHINGTON (REUTERS) - US President Donald Trump knew for weeks that national security adviser Michael Flynn had misled the White House about his contacts with Russia but did not immediately force him out, an administration spokesman said on Tuesday (Feb 14).

Trump was informed in late January that Flynn had not told Vice-President Mike Pence the whole truth about conversations he had with Russia’s ambassador to the United States before Trump took office, White House spokesman Sean Spicer said.

Flynn quit on Monday after Trump lost trust in him and asked for his resignation, Spicer said. “The issue pure and simple came down to a matter of trust,” Spicer told reporters. 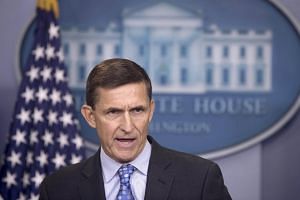 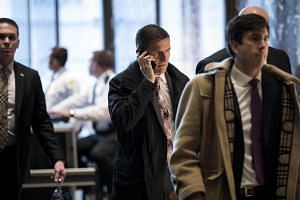 The departure was another disruption for an administration already repeatedly distracted by miscues and internal dramas since the Republican businessman assumed the presidency on Jan 20.

US lawmakers, including some leading Republicans, called for a deeper inquiry into not just Flynn’s actions but broader White House ties to Russia. Trump has long said that he would like improved relations with Russian President Vladimir Putin.

A timeline of events outlined by Spicer and a US official showed that Trump knew for weeks about Flynn misleading the Vice-President.

The Justice Department warned the White House in late January that Flynn had misled Pence by denying to him that he had discussed US sanctions on Russia with Ambassador Sergei Kislyak, a potentially illegal act, a US official said.

Flynn did talk about sanctions with the diplomat, whose calls were recorded by US intelligence officials, the official said. But Pence went on television in mid-January and denied that Flynn had discussed sanctions.

Spicer stressed that the administration believed there was no legal problem with Flynn’s conversations with Kislyak, but rather an issue over the President’s trust in his adviser.

He said the Justice Department sought to notify the White House counsel on Jan 26. about the discrepancies in Flynn’s accounts.

“The White House counsel informed the president immediately. The President asked them to commit a review of whether there was a legal situation there. That was immediately determined there wasn’t. That was what the President believed at the time from what he had been told and he was proved to be correct,” Spicer told reporters.

Flynn’s conversations with the ambassador took place around the time that then-president Barack Obama imposed sanctions on Russia, charging that Moscow had used cyber attacks to try to influence the 2016 presidential election in Trump’s favour.

A US official familiar with the transcripts of the calls with the ambassador said Flynn indicated that if Russia did not retaliate in kind for Obama’s Dec 29 order expelling 35 Russian suspected spies and sanctioning Russian spy agencies, that restraint could smooth the way towards a broader discussion of improving US-Russian relations once Trump took power.

Flynn’s discussions with the Russian diplomat could potentially have been in violation of a law known as the Logan Act, banning private citizens from negotiating with foreign governments about disputes or controversies with the United States. However, nobody has been prosecuted in modern times under the law, which dates from 1799.

Democrats, who do not have control of Congress, clamoured for probes into Flynn, and asked how much Trump knew about his connections to Russia.

“The American people deserve to know at whose direction Gen Flynn was acting when he made these calls, and why the White House waited until these reports were public to take action,” Democrat Mark Warner, the Senate intelligence committee’s vice-chairman, said in a statement.

Two leading Republicans in the Senate, Bob Corker and John Cornyn, also said the intelligence committee should investigate Flynn’s contacts with Russia. Corker said Flynn may need to testify to a congressional hearing.

Republican Senator Roy Blunt, a member of the same committee, told a St Louis radio station that the panel should interview Flynn “very soon” as part of its investigation into attempts by Russia to influence the US election.

But the highest-ranking Republican in Congress, House of Representatives Speaker Paul Ryan, sidestepped questions about whether lawmakers should look into Flynn’s Russia ties, adding he would leave it to the Trump administration to explain the circumstances behind Flynn’s departure.

Flynn, an early and enthusiastic supporter of Trump, was a strong advocate of a softer line towards Putin, and his departure could hinder Trump’s efforts to warm up relations with Moscow.

Senator John McCain, a leading Republican voice on foreign relations, said Flynn’s resignation raised questions about the administration’s intentions toward Putin’s Russia, “including statements by the President suggesting moral equivalence between the United States and Russia despite its invasion of Ukraine, annexation of Crimea, threats to our Nato allies, and attempted interference in American elections.”