United States President-elect Donald Trump on Monday (Nov 21) released a YouTube video where he outlined his policy plans for his first 100 days in office.

Mr Trump, who is set to take office on Jan 20, named several items on his list of priorities on issues such as trade, national security, energy, regulations and lobbying.

What was notable, however, was that a number of his more controversial campaign promises - particularly those on immigration - were not mentioned in the video.

Here's a look at some of the key items on his agenda, within the first 100-days and beyond, and how likely it is the billionaire magnate will make good on his campaign promises.

1) WITHDRAWAL FROM THE TRANS-PACIFIC PARTNERSHIP (TPP)

Mr Trump had vowed to scuttle the12-nation trade pact, a signature trade initiative of President Barack Obama, during his campaign and Mr Trump made clear on Monday it was his top priority in his 100-day plan.

Calling the plan a "potential disaster for our country", he said he would formally declare the US intention to withdraw from the TPP. The deal, which Singapore is a part of, can only go into force if the US is on board.

Since the deal was never approved by Congress, Mr Trump will not have to do anything to get out of the pact. But the New York Times notes that his additional promise to "negotiate fair, bilateral trade deals that bring jobs and industry back onto American shores" will be in the eyes of the beholder, and may not produce the results he expects.

Mr Trump said on Monday he would cancel some restrictions on producing energy in the US on his first day in office, particularly shale oil and "clean coal", which he said would create "many millions of high-paying jobs.

Analysts AFP spoke to however, are not so sure. They say his plans to open more areas to exploration could exacerbate the global oversupply, which would reduce prices while doing little to revive the fortunes of "Big Coal."

During his campaign, Trump promised to cut federal agency regulations if elected as a means of boosting US economic growth.

Business groups argue that the Obama administration had impeded growth by significantly expanding regulation in areas including environmental and worker protections.

Mr Trump repeated his campaign pledge on Monday to implement "a rule which says that for every one new regulation, two old regulations must be eliminated" although he did not elaborate.

According to the New York Times, Mr Trump will likely be able to use his authority to undo the federal regulations through the same lengthy bureaucratic process that is used when they are created. 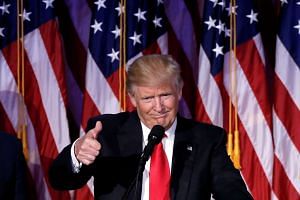 From border wall to climate pact exit: Will Trump make good on his campaign pledges?

On the campaign trail, Mr Trump had often vowed to "drain the swamp" in Washington. On Monday, he repeated the campaign pledge, saying he would seek to implement "a five-year ban on executive officials becoming lobbyists after they leave the administration."

Mr Trump is also eyeing a lifetime ban on White House officials lobbying for a foreign government and a ban on foreign lobbyists raising money for US elections. The New York Times notes that Mr Trump does not need congressional approval on this measure and his transition team has already asked administration appointees to sign a form agreeing to the policies.

Mr Trump has said he will work with Congress to pass a bill that finances the construction of a southern border wall "with the full understanding" that Mexico will reimburse the United States. But Mexico has said it will not pay for the wall. If he is able to get Congress to fund the wall - a big if - Mr Trump would still have to overcome a myriad of environmental and legal hurdles in order to move forward.

Mr Trump has pledged to deport illegal immigrants with criminal records, and jail people who illegally re-enter the US. Once in office, Mr Trump can end, without Congress approval, President Barack Obama's initiatives that currently protect more than 5 million illegal immigrants from deportation. He pledges "zero tolerance for criminal aliens" on his transition website but doesn't spell out how they would be dealt with. Mass deportation could cost as much as US$166 billion, including the cost of erecting a wall.

Mr Trump had made repealing Mr Obama's signature healthcare policy, the Affordable Care Act or popularly known as Obamacare, another of his central campaign themes.

The plan has insured millions people who would have struggled to afford medical cover but it has also pushed up premiums for Americans not on government assistance. As a candidate, Mr Trump had said he would call for a full repeal on "day one" of the new administration. Now that he has been elected president, Trump's timeline is unclear. Most of what he wants to do requires an act of Congress and Mr Trump will need to work with Congress to carry it out.

Congress is unlikely to be able to repeal the entire law without a supermajority of 60 votes in the Senate, but it can eliminate parts of the law with a simple majority. Last year, it passed a bill that would have eliminated the law's Medicaid expansion, premium subsidies and the requirement that all Americans buy insurance, but Mr Obama vetoed it. Experts say repealing just these select parts of the law could lead to market chaos, and an estimated 22 million Americans would lose coverage.