WASHINGTON (AFP) - An adviser to Donald Trump's presidential campaign has admitted meeting with Russian government officials in 2016, according to a report in the New York Times which cited his testimony before a congressional committee.

Carter Page, a former Navy officer and investment banker who advised Trump on foreign policy, had previously denied or side-stepped the question of whether he had met with Russian officials in previous interviews with the Times, it said.

The development comes days after Trump's former campaign chairman Paul Manafort and an associate were placed under house arrest on money-laundering charges linked to an investigation by special counsel Robert Mueller into allegations that the campaign colluded with Russia.

The US Congress is also conducting three separate investigations into the allegations, which have dogged Trump since his election and which he has strongly denied.

Shortly after a July 2016 trip, Page "sent an email to at least one Trump campaign aide describing insights he had after conversations with government officials, legislators and business executives during his time in Moscow," the Times reported, quoting a person familiar with the matter.

Page later confirmed the meetings to the Times, and told CNN that Russian Deputy Prime Minister Arkady Dvorkovich was among those he met.

But he downplayed the significance of the meetings, telling the Times he had "a very brief hello to a couple of people." It is the latest example to emerge of a Trump aide meeting with Russian officials during the 2016 election after initially denying that such contacts occurred. Other officials include Trump's former National Security Advisor Michael Flynn, his son-in-law Jared Kushner, and Attorney General Jeff Sessions. 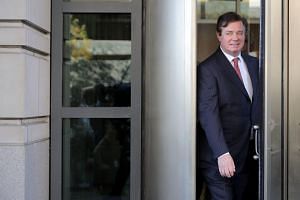 US judge orders Manafort, Gates to remain on home arrest

Following the arrest of Manafort and his protege Rick Gates, Trump said in a tweet that there was "no collusion" between his campaign and Russia, and noted that the allegations of criminal activity by Manafort came "years ago," before he joined the campaign.

Manafort and Gates have pleaded not guilty to charges that they allegedly hid millions of dollars gleaned from work with Ukrainian politician Viktor Yanukovych and his pro-Moscow political party.