The additional sanctions on Pyongyang, including on its shipping and trade networks, showed that Trump was giving more time for economic pressures to weigh on North Korea after warning about the possibility of military action on Tuesday in his first speech to the United Nations.

Donald Trump thanks China for action on North Korea

Asked ahead of a lunch meeting with the leaders of Japan and South Korea if diplomacy was still possible, Trump nodded and said, “Why not?”

North Korea under Kim Jong Un’s leadership has launched dozens of missiles as it accelerates a programme aimed at enabling it to target the United States with a nuclear-tipped missile.

Trump said the new executive order “significantly expands our authority to target individual companies, financial institutions, that finance and facilitate trade with North Korea” and “will cut off sources of revenue that fund North Korea’s efforts to develop the deadliest weapons known to humankind.” 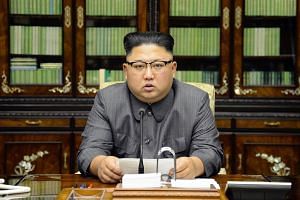 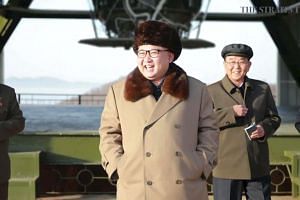 Donald Trump’s ultimatum: Choose between US and North Korea

The US Treasury Department now had authority to target those that conduct “significant trade in goods, services or technology with North Korea.”

Trump did not mention Pyongyang’s oil trade. The White House, in a statement, later said North Korea’s energy, medical, mining, textiles and transportation industries were among those targeted and that the US Treasury could sanction anyone who owns, controls or operates a port of entry in North Korea.

US Treasury Secretary Steven Mnuchin said banks doing business in North Korea would not be allowed to also operate in the United States.

“No bank in any country should be used to facilitate Kim Jong Un’s destructive behaviour,” Mnuchin told reporters. “Foreign financial institutions are now on notice that going forward they can choose to do business with the United States or with North Korea, but not both.”

Mnuchin said any sanctions issued under the executive order signed by Trump on Thursday would not target past behaviour.

The UN Security Council has unanimously imposed nine rounds of sanctions on North Korea since 2006, the latest this month capping fuel supplies to the isolated state.

European Union ambassadors have reached an initial agreement to impose more economic sanctions on North Korea, going beyond the latest round of UN measures, officials and diplomats said.

Trump warned the North Korean leader in his UN address on Tuesday that the United States, if threatened, would “totally destroy” his country of 26 million people.

It was Trump’s most direct military threat to attack North Korea and his latest expression of concern about Pyongyang’s repeated launching of ballistic missiles over Japan and underground nuclear tests.

South Korean President Moon Jae-in, who met with Trump on Thursday and addressed the UN General Assembly, said sanctions were needed to bring Pyongyang to the negotiating table and force it to give up its nuclear weapons, but Seoul was not seeking North Korea’s collapse.

“All of our endeavours are to prevent war from breaking out and maintain peace,” Moon said in his speech. He warned the nuclear issue had to be managed stably so that “accidental military clashes will not destroy peace.”

North Korea crisis must be handled in stable manner: Moon Jae In

China’s foreign minister Wang Yi called on North Korea not to go further in a “dangerous direction” with its nuclear programme. “There is still hope for peace and we must not give up. Negotiation is the only way out... Parties should meet each other half way, by addressing each other’s legitimate concerns.”

Joseph DeThomas, a former State Department official who worked on Iran and North Korea sanctions, said the order would make UN resolutions more effective while not initiating an economic war with China, but added: “Unfortunately, after the president’s UN speech, it is very unlikely this will have a positive effect. At this point, no matter how many sanctions are piled on, the current government of North Korea simply cannot give in.”

The United States and South Korea are technically still at war with North Korea because the 1950-53 Korean conflict ended with a truce and not a peace treaty. The North accuses the United States, which has 28,500 troops in South Korea, of planning to invade and regularly threatens to destroy it and its Asian allies.

On Wednesday, US Secretary of State Rex Tillerson said there were “some indications” that sanctions were beginning to cause fuel shortages in North Korea.