Kudlow, a Republican who served as an economic adviser to former President Ronald Reagan in the 1980s and also worked on Wall Street, is an ardent advocate of “supply side” economic policies that focus on cutting taxes and reducing regulations.

Kudlow, 70, told Reuters that Trump offered him the job on Tuesday evening and he accepted. White House spokeswoman Sarah Sanders confirmed that Trump had offered him the position. A formal announcement could come as early as Thursday.

“He’s generally regarded to be more of a free trade advocate than (White House adviser Peter) Navarro or the others,”Zaccarelli said.

“This shows that (Trump) wants to hear the other side of the argument as well.”

Kudlow, a CNBC contributor, has acknowledged ups and downs in his life, having been addicted to drugs and alcohol before getting sober more than 20 years ago.

The NEC director can have wide influence over the president on a variety of issues from steering economic policy to offering guidance on whom to choose for open positions at the US Federal Reserve. 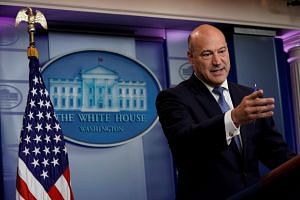 Cohn, a Democrat and “globalist” who was seen as a moderating influence on the president’s economic policies, resigned after a disagreement with Trump’s decision to impose steep tariffs on imports of steel and aluminium.

But Trump said on Wednesday that Kudlow had “come around” to view tariffs as a useful tool for renegotiating trade deals.

Kudlow has championed what he describes as “pro-growth” economic policies that include cutting taxes and regulation and boosting free trade.

The White House economic adviser can have wide influence over the president on a wide variety of issues from steering economic policy to offering guidance on whom to choose for open positions at the US Federal Reserve.