WASHINGTON (REUTERS) - US President Donald Trump on Thursday (April 27) spurned the Taiwanese president's suggestion that the two leaders hold another phone call, saying he did not want to create problems for Chinese President Xi Jinping at a time when Beijing appears to be helping with efforts to rein in North Korea.

In a White House interview, Trump brushed aside the idea after Taiwanese President Tsai Ing-wen told Reuters on Thursday that she would not rule out talking directly again to the US president, an act certain to incense China.

The status of self-ruled Taiwan is possibly the most sensitive issue between Washington and Beijing.

"Look, my problem is I have established a very good personal relationship with President Xi. I really feel that he is doing everything in his power to help us with a big situation," Trump told Reuters, referring to signs that China may be working to head off any new missile or nuclear test by Pyongyang, Beijing's neighbour and ally. 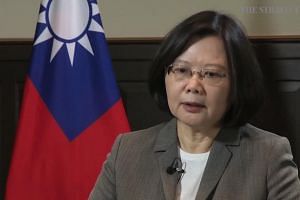 As president-elect in early December, Trump took a congratulatory phone call from Tsai. It was the first contact between a leader of Taiwan and an incumbent or incoming US president in nearly four decades, and Trump cast doubt on Washington's longstanding policy of acknowledging Beijing's "one China" policy, which asserts that Taiwan is a part of China.

The call angered Beijing because it fears contacts between Taiwan and leaders of other countries would confer sovereignty on the island.

Trump agreed to honour the "one China" policy in February and then hosted Xi at his Florida resort earlier this month.

Trump's dismissal of Tsai's suggestion underscored the importance he is placing on enlisting China's help in defusing tensions with North Korea, which has become his biggest national security challenge since taking office in January, 100 days ago come Saturday.

In Taipei, Tsai told Reuters that Taiwan's ties with the United States have been improving. She said Taiwan may need to buy from its sole arms supplier the F-35 fighter jet, the most advanced stealth warplane in the US arsenal.

Tsai said "we don't rule out any items that would be meaningful to our defence and our defence strategy and the F-35 is one such item."

But when told that Taiwan's president had said the island might want to buy F-35 aircraft, Trump said: "Oh, I haven't been informed. I'd have to think about that. I'd have to speak to my people about that. They (the Taiwanese government) do buy a lot of equipment from us."

China's Defence Ministry said on Thursday that it was resolutely opposed to any country selling arms to Taiwan.

US officials told Reuters last month that the Trump administration was crafting a big arms package for Taiwan that could include advanced rocket systems and anti-ship missiles to defend against China, a deal sure to anger Beijing.

But one of the officials, speaking on condition of anonymity, said at the time that the administration was not considering selling the F-35 to Taiwan.

The package is expected to be significantly larger than one that was shelved at the end of the Obama administration - valued at around US$1 billion (S$1.4 billion) - but completion of a new deal could take months and possibly into next year, the official said.