PARKLAND,  Florida (NYTIMES) - President Donald Trump said on Thursday (Feb 15) that he would make school safety a top priority when he meets with the nation’s governors later this month, following one of the deadliest school shootings in modern US history.

In the address to the nation, he also said he planned to visit the grieving South Florida community where a gunman killed 17 students and adults at a local high school. But he pointedly avoided any mention of gun control.

“We are here for you – whatever you need, whatever we can do, to ease your pain,” Trump said, calling the deaths at Marjory Stoneman Douglas High School in Parkland a “scene of terrible violence, hatred and evil.”

Nikolas Cruz, who barged into his former high school with a semi-automatic AR-15 rifle Wednesday afternoon, was charged Thursday with 17 counts of premeditated murder, one for each of the students and adults he killed.

Cruz, 19, was booked into jail in Broward County and authorities released a mug shot of him staring wide-eyed into the camera.

The FBI on Thursday said it received information about a comment made on a YouTube channel that has been attributed to the gunman, but were unable to identify the person.

Governor Rick Scott of Florida said he would meet with state lawmakers to secure more funding for school safety and the treatment of mental illness.

“If we have somebody that’s mentally ill, they can’t have access to a gun,” Scott said.

Authorities said the AR-15 rifle that Cruz used in the attack was purchased legally.

“No laws were violated in the procurement of this weapon,” said Peter J. Forcelli, special agent in charge for the Bureau of Alcohol, Tobacco, Firearms and Explosives in Miami.

With the Parkland shooting, three of the 10 deadliest mass shootings in modern US history have come in the last five months.

Ben Bennight, a bail bondsman in Mississippi, said in a video posted Wednesday that he reported a suspicious comment left on his YouTube channel last fall by a user named “nikolas cruz.”

“I’m going to be a professional school shooter,” the Sept 24 comment said.

Bennight took a screenshot of the comment and flagged it to YouTube, which removed the post. Then, Bennight said he left a voicemail message at his local FBI field office alerting them about the comment.

Bennight, 36, spoke briefly with The New York Times on Thursday. He said when he originally reported the comments to the FBI, a pair of agents interviewed him the next morning. Bennight said two FBI agents visited him a few hours after the shooting Wednesday, spending about 15 to 20 minutes with him. The agents told him they thought the person who posted on his channel might be connected to the Florida shooting because they had the same name.

The FBI on Thursday released a statement that said it received information about a comment made on a YouTube channel in September 2017.

“No other information was included in the comment which would indicate a particular time, location, or the true identity of the person who posted the comment,” the statement said.

The FBI said it conducted database reviews and other checks, but were unable to further identify the person who posted the comment.

Bennight did not fault the FBI, he said.

“We live in a country where you can’t just lock people away for saying something,” he said. “You can’t just stuff somebody in a black hole because they said something that makes you uncomfortable. I believe the FBI took it seriously. I hope that they followed up.”

“So many signs that the Florida shooter was mentally disturbed, even expelled from school for bad and erratic behaviour,” Trump said.

“Neighbours and classmates knew he was a big problem. Must always report such instances to authorities, again and again!”

Later, in his televised address, Trump said he plans to work with state and local leaders to “tackle the difficult issue of mental health.”

The President has blamed mental illness on previous mass shootings, even as one of his first acts as president was to repeal an Obama-era regulation that would add the names of mentally ill Americans registered with the Social Security Administration to the database used for gun purchase background checks. 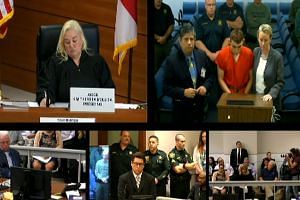 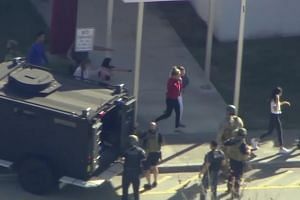 Without offering any specific proposals, Attorney-General Jeff Sessions said on Thursday, “We’ve got to reverse these trends we’re seeing in these shootings.”

He added that the Justice Department was prepared to enforce existing gun laws and that he met with officials from the Health and Human Services and Education departments on Thursday to study “the intersection of mental health and criminality and violence.”

On weekday mornings, Cruz usually got up to catch a ride to the adult education courses that the family he had stayed with after his mother’s death last year had encouraged him to attend, the family’s lawyer, Jim Lewis, told CNN. But on Wednesday, he refused to get up, Lewis said.

He had been staying with the family since November, the month his mother, Lynda Cruz, died. Lewis said that the family had seen signs of depression in Nikolas Cruz, but nothing indicated that he was capable of this kind of violence.

The family had allowed Cruz to bring his gun with him to their house, insisting that he keep it in a lockbox.

“This family did what they thought was right which was take in a troubled kid and try to help him,” he said.

That included Lewis encouraging Cruz to attend adult education courses and work towards his GED. As the months wore on, the family thought his mood seemed to be improving. Though they were aware that he had disciplinary problems at his former school and there were some indications that he had been bullied, he had never shared contempt for the school or anyone there with them.

In the hours after the shooting, people who knew Cruz described him as a “troubled kid” who enjoyed showing off his firearms, bragging about killing animals and whose mother would resort to calling police to have them come to their home to try to talk some sense into him.

Senator Richard Blumenthal disputed Trump’s gesture towards mental health, pointing out the high rates of gun violence in the United States compared with other countries.

In an appearance on CNN, Blumenthal said that after the Sandy Hook school shooting in 2012, Connecticut worked to cut down on gun violence by passing measures to ban assault weapons and increase background checks.

But he said that even states that had worked to improve gun safety were vulnerable. “We are at the mercy of the weakest states, even when we have the strongest gun laws,” he said.

Senator Bill Nelson of Florida, in an appearance on CNN, railed against the inability of his state to pass effective legislation to help prevent attacks like the one Wednesday. He pointed out that, with the Pulse shooting in Orlando that killed 49 and a shooting at the Fort Lauderdale airport that killed five, it was the third mass shooting attack in the last couple of years in Florida alone.

“We’ve been through this a lot and each time we say enough is enough and then of course it isn’t enough,” he said.

Many students used their phones to keep their parents informed about what was happening, and to document some of the violence that was unfolding around them.

Sarah Crescitelli, a freshman, was in drama class rehearsing for a musical when gunshots rang out.

Hiding in a sweltering storage room with about 40 other students, she typed out a text message to her mother, Stacy, for what she thought might be the last time.

“If I don’t make it,” she wrote, “I love you and I appreciate everything you did for me.”