WASHINGTON (NYTIMES) -  President-elect Donald Trump on Monday (Dec 12) settled on Mr Rex W. Tillerson, the chief executive of Exxon Mobil, to be his secretary of state, dismissing bipartisan concerns that the globe-trotting leader of the energy giant had forged a too-cozy relationship with Russian President Vladimir Putin, transition officials said.

Mr Trump planned to announce the selection on Tuesday morning (Tuesday night Singapore time), finally bringing to an end his public and chaotic deliberations over choosing the nation’s top diplomat – a process that at times veered from rewarding Mr Rudy Giuliani, one of his most loyal supporters, to musing about whether Mr Mitt Romney, one of his most vicious critics, might be forgiven.

In the end, Mr Trump did neither, discarding not only Mr Giuliani and Mr Romney, but also passing over an endlessly changing list that at times included Senator Bob Corker, former US Army general and ex-CIA director David Petraeus, and Mr Jon Huntsman Jr, the former Utah governor and presidential candidate in 2012.

Mr Romney, Gen Petraeus and Mr Corker – the three leading runners-up for the diplomatic posts – all received calls late Monday informing them of Mr Trump’s decision, according to people familiar with the President-elect’s final choice.

Mr Trump teased his imminent announcement of Mr Tillerson on Monday night on Twitter, saying that “I will be making my announcement on the next Secretary of State tomorrow morning”.

He settled on Mr Tillerson, a dealmaker who has spent the past four decades at Exxon, much of it in search of oil and gas agreements in troubled parts of the world. A native of Wichita Falls, Texas, who speaks with a strong Texas twang, Mr Tillerson, 64, runs a company with operations in about 50 countries, cutting deals to expand business in Venezuela, Qatar, Kurdistan and elsewhere.

If confirmed as secretary of state, Mr Tillerson would face a new challenge: nurturing alliances around the world that are built less on deals and more on diplomacy.

That could prove to be a special test when it comes to Russia, where Mr Tillerson has fought for years to strengthen ties through business negotiations worth billions of dollars. Under his leadership, Exxon has entered into joint ventures with Rosneft, a Russian-backed oil company, and donated to that country’s health and social programmes.

In his new role, Mr Tillerson would have to manage the difficult relationship between the United States and Mr Putin’s Russia, including economic sanctions imposed on Moscow for its intervention in Ukraine. Last month, President Barack Obama and European leaders agreed to keep sanctions in place until Mr Putin agrees to a ceasefire and to withdraw heavy weapons from front lines in eastern Ukraine.

In the past several days, as officials close to Mr Trump suggested that he was close to choosing Mr Tillerson, Republican and Democratic lawmakers warned Mr Tillerson would face intense scrutiny over his two-decade relationship with the Russian leader. Russia awarded Mr Tillerson its Order of Friendship in 2013.

Senator John McCain said on Saturday that Mr Tillerson’s ties to Mr Putin were “a matter of concern to me” and promised to examine them closely were he to be nominated.

“Vladimir Putin is a thug, bully and a murderer, and anybody else who describes him as anything else is lying,” Mr McCain said on Fox News. 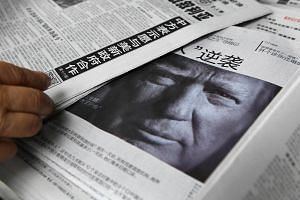 Other Republicans who have challenged Mr Tillerson’s potential selection include Senator Marco Rubio of Florida, who expressed concern in a Twitter post on Monday about the Exxon chief’s relationship with Mr Putin.

But the President-elect has decided to risk a bruising confirmation fight in the Senate, apparently concluding that Mr Tillerson will ultimately be allowed to lead the State Department.

Mr Trump had favoured Mr Giuliani initially, but he quickly grew weary of the former New York mayor’s penchant for drawing outsize news media attention. Mr Trump was also troubled by reports of Mr Giuliani’s business entanglements overseas. And some of the President-elect’s closest advisers, including his son-in-law Jared Kushner, saw Mr Giuliani as a poor fit for the job.

That led to interest in Mr Romney, who had called Mr Trump a “fraud” and a “phony” during the campaign. Mr Romney also highlighted Russia as a danger to US interests during the 2012 race.

Mr Trump and Mr Romney made peace, meeting twice and speaking periodically by phone. But some of Mr Trump’s advisers, including his last campaign manager Kellyanne Conway, warned publicly in a series of television interviews that some of his supporters would quickly drift away if Mr Romney were tapped for the job.

Mr Tillerson emerged as a contender on the strong recommendations of Mr James Baker III, the secretary of state under the first President George Bush, and Mr Robert M. Gates, the former defence secretary, according to a person briefed on the process.

Mr Trump met Mr Tillerson for more than two hours on Saturday at Trump Tower in Manhattan and was said to have established a clear rapport with him. To his aides, Mr Trump described Mr Tillerson as in a different “league” than his other options, language that Mr Bannon and Mr Kushner had both used.

Mr Romney acknowledged late Monday in a Facebook post that he had been passed over, writing that “it was an honour to have been considered for secretary of state of our great country”.

“My discussions with President-elect Trump have been both enjoyable and enlightening,” Mr Romney wrote, adding that he had “very high hopes that the new administration will lead the nation to greater strength, prosperity and peace".