WASHINGTON (AFP) – US President Donald Trump on Saturday (Aug 4) defended his controversial use of tariffs against China and other countries, saying the trade measures are “working far better than anyone ever anticipated.”

“Tariffs have had a tremendous positive impact on our Steel Industry,” he said in one tweet.

“Plants are opening all over the US, Steelworkers are working again, and big dollars are flowing into our Treasury.”

“Tariffs will make our country much richer than it is today,” Trump said in another tweet.

“Only fools would disagree.”

He also said China was “for the first time doing poorly against us.”

His tweets came amid a new surge in trade tensions with China.

Earlier this week, the US president told his top trade official to study whether to raise tariffs on US$200 billion (S$270 billion) in Chinese goods from a planned 10 per cent to 25 per cent.

Beijing then threatened to impose an additional US$60 billion in tariffs on a variety of American goods – which White House economic adviser Larry Kudlow dismissed as “a weak response.”

Speaking on the sidelines of a security forum in Singapore, he hit back at Kudlow’s remarks: “As to whether China’s economy is doing well or not, I think it is all too clear to the whole international community,” Wang said, adding that China contributed a huge amount to global economic growth.

The growing friction with China has raised concerns in both countries – and reportedly even within the Trump administration – about collateral damage. 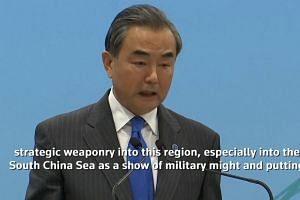 “We said before that this round of tariffs amounted to doubling down on the recklessness of imposing trade policy that will hurt US families and workers more than they will hurt China,” a major trade group, the National Retail Federation, said in a statement last week.

While Trump has taken credit for new steel jobs created with the help of tariffs, retaliatory measures by Beijing and others have rattled US soybean farmers and the many companies reliant on increasingly expensive steel as a raw material.