Daniels, whose legal name is Stephanie Clifford, says she had sex with Trump in 2006 and is fighting a 2016 nondisclosure agreement arranged by Trump's personal attorney, Michael Cohen, in which she was paid US$130,000 (S$170,000) to keep silent.

Trump's lawyers are seeking at least US$20 million in damages from Daniels for violations of the nondisclosure agreement.

On Tuesday, she and her attorney, Michael Avenatti, released a sketch of a man whom she said had threatened her in 2011, and offered a US$100,000 reward for information leading to his identification.

Avenatti announced on Wednesday the reward had been increased to US$131,000.

The picture they released showed a man with facial stubble and a chiselled jaw, who was wearing a hoodie. Daniels said in an interview with ABC on Wednesday that she thought he was someone's husband and described him as "sort of handsome".

Trump has largely remained quiet on the subject, although he told reporters earlier this month that he did not know about the payment to Daniels.

Stormy Daniels releases sketch of man she says threatened her 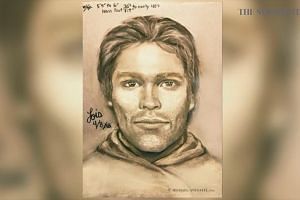 However, on Wednesday, in his first reference to Daniels via Twitter, he said in a post: "A sketch years later about a nonexistent man. A total con job, playing the Fake News Media for Fools (but they know it)!"

"In my experience, there is nothing better in litigation than having a completely unhinged, undisciplined opponent who is prone to shooting himself in the foot. Always leads to BIGLY problems... like new claims (i.e. defamation)," Avenatti said in one of two posts.

The sketch was released the day after a hearing in federal court in Manhattan, where Trump attorney Cohen fought to limit the capability of federal prosecutors to review documents seized in a raid by FBI agents on his home, office and hotel room.

Warning: As the walls close and reality sets in that the most damaging witnesses, secrets and evidence are no longer protected, fully expect the following: sheer panic, personal attacks, tirades, and distraction. But none of it will change the outcome in the end... #basta

A source familiar with the raids said that the agents were looking for more information on payments to Daniels within materials related to Cohen's business dealings. The raids are related to a separate investigation into possible collusion between Russia and Trump's 2016 presidential campaign.

Trump has repeatedly said there was no collusion.