CHARLEVOIX, Quebec (AFP) – President Donald Trump drove the wedge splitting Washington from its Western allies even deeper on Friday (June 8) with a spontaneous call for Russia to be readmitted to the G-7 club.

As the heads of the top industrialised democracies embarked on a two-day G-7 summit in rural Quebec, European leaders warned that Trump’s stance on trade, climate, Iran and – now – Russia was setting him apart.

Already angered by Trump’s imposition of tariffs on steel and aluminium – and planning to respond with measures of their own that could spiral into a trade war – the allies now fear a rift in the united western front against Russian aggression.

Before jumping on Air Force One to fly to Canada, which is hosting the summit in La Malbaie north of Quebec City, Trump called for a return to the body’s pre-2014 “G-8” formula.

“They threw Russia out. They should let Russia come back in because we should have Russia at the negotiating table,” the US leader said before boarding the presidential jet.

US officials travelling with Trump admitted they had been surprised by Trump’s suggestion, which one said was “not something planned,” and Canada’s Foreign Minister Chrystia Freeland said it had not been formally put on the G-7 table.

But on the sidelines, European leaders scrambled to agree on a common position strongly opposing Russian re-admission.

Moscow was expelled from the rich nations club, which sees itself as a guarantor of rules-based order and the global economy, over its 2014 annexation of Ukraine’s Crimea region. 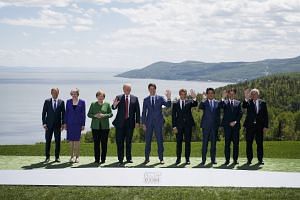 “We are in agreement that a return of Russia to the G-7 cannot happen unless substantial progress is made in terms of the problems with Ukraine,” Germany’s Chancellor Angela Merkel said.

Donald Tusk, the former Polish leader attending as president of the European Council, saw the call for Russia’s return as part of a raft of unilateral measures imposed by Trump that have driven Washington apart from US allies.

“It is evident that the American president and the rest of the group continue to disagree on trade, climate change and the Iran nuclear deal,” Tusk admitted.

Tusk warned that “the rules-based international order is being challenged, quite surprisingly not by the usual suspects but by its main architect and guarantor, the US.”

And he said Trump’s determination to bait his allies over trade and diplomatic engagements “would only play into the hands of those who seek a new post-West order where liberal democracy and fundamental freedoms would cease to exist.”

Canada has been particularly outraged that Trump invoked a national security justification for his global tariff on steel and aluminium imports, even those from close US allies.

“We are very clear that Canada does not pose a national security threat to the United States,” Freeland said.

“So this an illegal act. It is absolutely unjustified. We have already raised cases at the WTO and at Nafta, and we will retaliate,” she warned.

Trump was the last G-7 leader to arrive and will probably be the first to leave on Saturday when he sets off for his nuclear summit with North Korea’s Kim Jong Un in Singapore.

With unmistakable symbolism, the fractious Western democracies were meeting on the same day that China’s President Xi Jinping welcomed his Russian counterpart Vladimir Putin to Beijing.

Three decades after the end of the Cold War, the G-7 nations are split over trade, climate and multilateral engagements such as the Iran nuclear deal.

And at the same time, the US president seems more at home with autocrats than with Washington’s traditional allies.

The “America First” president’s broadside before leaving Washington reinforced predictions that the Quebec G=7 would be the first such summit to end without an agreed joint statement.

“All of these countries have been taking advantage of the United States on trade,” he said before flying out.

“We have massive trade deficits with almost every country. We will straighten that out.”

Host Canada and its European allies are striving to put together a united front to oppose Trump’s tariffs on aluminum, steel, cars and other exports, but the markets are rattled.

European and Asian stocks indices were down across the board Friday – despite a week of gains in the wake of robust US jobs data and easing political headwinds in Italy and Spain. In New York, the Dow dipped in early trade.

Macron and Canada’s Prime Minister Justin Trudeau, who also sought friendship with Trump, made it clear they would prefer no consensus to a climbdown on trade.

“The American president may not mind being isolated, but neither do we mind signing a six country agreement if need be,” Macron said in a tweet.

Trudeau told reporters the US national security justification for the tariffs on steel and aluminum was “laughable.” On Friday, bilateral meetings preceded roundtable discussions.

Later the leaders were to tuck into a dinner of lobster, asparagus and maple leaves nestled on a brioche at the end of the first day of talks.

The summit is being held at a luxury resort more than two hours’ drive from the provincial capital, where more than 400 protesters faced off Thursday and Friday against police.

Previous G-7 summits have seen large-scale anti-globalisation protests, but Trump was a main target of the demonstration as masked anarchists set fire to US flags and those of other G-7 nations.