PALM BEACH, UNITED STATES (AFP) - US President-elect Donald Trump announced on Wednesday (Nov 23) that he intends to nominate Betsy DeVos, a wealthy Republican campaigner for alternatives to public schools, as his education secretary.

Ms DeVos is the second woman Mr Trump has tapped to fill a Cabinet position. He earlier named South Carolina Governor Nikki Haley to be US ambassador to the United Nations.

Ms DeVos is a Republican megadonor from Michigan who has been active in promoting school choice, a movement that advocates the use of tax credits and vouchers to allow parents to opt out of the public school system.

"Under her leadership we will reform the US education system and break the bureaucracy that is holding our children back so that we can deliver world-class education and school choice to all families," Mr Trump said.

Ms DeVos is chairman of the Windquest Group, an investment group with a clean energy focus; the Dick and Betsy DeVos Family Foundation; and the American Federation for Children, a group that describes itself as dedicated to "breaking down barriers to educational choice", particularly for low-income families. 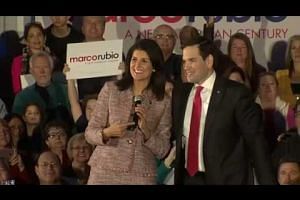 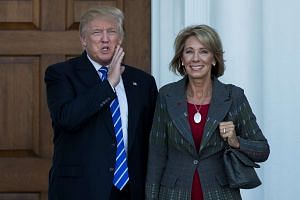 Betsy DeVos: From philanthropist and activist to US education secretary

She is the sister of Mr Erik Prince, the founder of Blackwater USA, a security firm whose operations in Iraq aroused controversy. Her father was the founder of an automobile parts supplier.

Her husband's father Richard DeVos was ranked Number 88 on Forbes' list of US billionaires, with a fortune estimated to be worth US$5.4 billion (S$7.7 billion).

Mr Trump's views on education have been inconsistent, but during the campaign he promised a US$20 billion (S$28.65 billion) federal programme to allow low-income students to attend private or charter schools.

"The status quo in education is not acceptable," Ms DeVos said in a statement accepting the offer of the education secretary position.

"Together, we can work to make transformational change that ensures every student in America has the opportunity to fulfil his or her highest potential."