WASHINGTON - US President Donald Trump and visiting Japanese Prime Minister Shinzo Abe appear to have got off to a good start at their summit in Washington DC, with Mr Trump saying at a joint press conference “We are committed to the security of Japan.”

The President also thanked Mr Abe for hosting US forces in Japan.

“We developed a great friendship” he said. “We have very good chemistry.”

The two leaders' joint statement said: “Amid an increasingly difficult security environment in the Asia-Pacific region, the United States will strengthen its presence in the region, and Japan will assume larger roles and responsibilities in the alliance.”

Mr Trump in mentioning the security alliance, alluded as well to Article 5 of the Japan-US Security Treaty, which refers to “territories under the administration of Japan” as covered by the agreement. The joint statement did as well, saying “Article V of the US-Japan Treaty of Mutual Cooperation and Security covers the Senkaku Islands.”

Japan and the US “oppose any unilateral action that seeks to undermine Japan's administration of these islands” the statement said. “The United States and Japan will deepen cooperation to safeguard the peace and stability of the East China Sea.”

“The United States and Japan oppose any attempt to assert maritime claims through the use of intimidation, coercion or force... (and)... call on countries concerned to avoid actions that would escalate tensions in the South China Sea, including the militarisation of outposts, and to act in accordance with international law.” 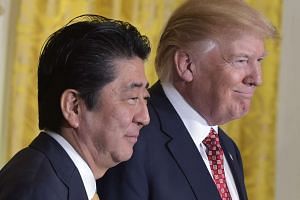 The statement also “affirmed the commitment of the United States and Japan to the realignment of US forces in Japan, to ensure the long-term, sustainable presence of US forces".

At their joint press conference, Mr Abe heaped praise on Mr Trump, and refused to be drawn into criticising his decision to withdraw the US from the Trans Pacific Partnership.

Mr Abe referred to a “new framework for economic dialogue” which will be the subject of further discussions between him and Mr Trump, and between Deputy Prime Minister and Finance Minister Taro Aso and Vice-President Mike Pence.

The summit was a continuation of 24 hours of successful diplomacy in which Mr Trump also spoke the previous day at some length with President Xi Jinping of China – a conversation in which he affirmed the US’ “One China” policy.

On the Japan summit, “There’s not a lot of detail yet but the outlines of a very successful weekend visit are now on the table” said Dr Patrick Cronin, Asia-Pacific Security Programme director at the Centre for a New American Security (CNAS) over the phone.

“I think this is all pointing in the direction that both President Trump and Prime Minister Abe are fully committed to emerging with an extremely strong alliance, including one that has more economic and trade content.”

“This is essentially Japan responding to the new administration’s priority, in the wake of withdrawing from the TPP.”

On the table in proposals brought by Mr Abe, are potentially new and major investments that play to Mr Trump’s campaign promise of “jobs, jobs, jobs” for the largely white American middle class that - hurt by globalisation and the perceived neglect of the Washington political establishment - put him in power.

Mr Abe mentioned infrastructure, a pet subject for Mr Trump, pointedly saying a Japanese Shinkansen high-speed train would be able to reach New York City from Washington DC in one hour – compared to the three it takes now.

Mr Abe said he was looking forward to the weekend at Mr Trump’s personal resort in Florida. Quipping about his upcoming golf game with Mr Trump, he added “I’m always aiming for the cup. Never cut to… the goal with the shortcuts and short chops.”

“In a relaxed atmosphere, I hope to take time to discuss with Donald on the future of the world, future of the region and future of Japan in the United States.”

Added Dr Cronin : “Mr Abe is not here to criticise the President, he is here to find a way forward.”