WASHINGTON (AFP) - President Donald Trump abruptly cancelled his first trip to Latin America on Tuesday (April 10), hunkering down in the White House as he faces momentous decisions about military strikes in Syria and an FBI investigation that is inching closer to the Oval Office.

In a statement that surprised even some White House staff, press secretary Sarah Sanders said Trump's trip to Peru and Colombia - set to get under way on Friday - had been scrapped.

"The President will remain in the United States to oversee the American response to Syria and to monitor developments around the world," she said.

Trump had already cut the visit short twice - from five days, to three - and, finally, to none.

The combative US president had been expected in Peru for the Summit of the Americas, where he was likely to face protests and awkward meetings with leaders who have bristled at his repeated portrayal of Latino immigrants as rapists and thugs.

Trump is still expected to travel to his Mar-a-Lago holiday home in Florida on Monday, where a summit with Japanese Prime Minister Shinzo Abe will go ahead.

But until then Trump will remain in Washington - as will Pentagon chief Jim Mattis, who also has postponed planned weekend travel - as several gathering storms converge on the White House.

Trump pledged "major decisions" on Syria - he is expected to decide by the end of Tuesday whether to launch military strikes in response to a suspected chemical weapons attack blamed on Damascus and its allies.

On Monday, the Republican leader promised that the "heinous attack on innocent Syrians with banned chemical weapons" would be "met forcefully." 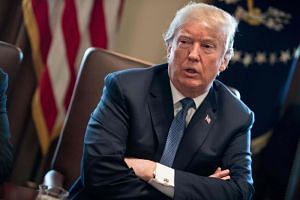 Trump plans major decisions on Syria in the next 24 to 48 hours; US says to act with or without UN 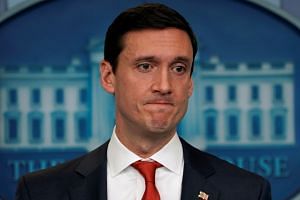 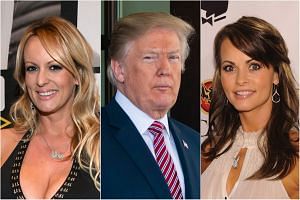 It was not immediately clear whether that decision would be delayed by news that a chemical weapons watchdog will be allowed access to Douma, the site of the attack, where at least 40 people were killed.

The Syrian regime and its backers in Moscow and Tehran have denied the attack took place, or suggested it was a "false flag" operation by rebels.

But that is just one crisis currently on the president's Resolute Desk.

Trump used a meeting with generals on Monday evening to rail against a raid on the offices of his personal lawyer, Michael Cohen.

While much of his national security team spent Monday evening discussing whether strikes would be effective in deterring future chemical attacks, and how to limit the risk of escalation, Trump met his lawyers Jay Sekulow and Ty Cobb to discuss the Cohen raid.

His anger had not abated by early on Tuesday.

"A TOTAL WITCH HUNT!!!" he blasted on Twitter amid news that FBI agents had seized documents pertaining to Trump's dealings.

The raid once again prompted Trump to muse about firing special counsel Robert Mueller, who is investigating Russia's efforts to swing the 2016 election in Trump's favour.

He also speculated about the position of his Attorney General Jeff Sessions and his deputy Rod Rosenstein.

That prompted Democratic members of Congress to push for Mueller to be protected.

"If the president is thinking of using this raid to fire Special Counsel Mueller or otherwise interfere with the chain of command in the Russia probe, we Democrats have one simple message for him: don't," top Senate Democrat Chuck Schumer said.

After months of silence, Trump last week offered a flat "no" when asked if he knew about the payment.

Meanwhile, the West Wing was rocked by another resignation of a senior Trump aide - Homeland Security Adviser Tom Bossert.

The announcement came a day after John Bolton took over as Trump's fourth national security adviser.