WASHINGTON (REUTERS, WASHINGTON POST) - United States President Donald Trump announced on Thursday (March 1) that he would impose hefty tariffs on imported steel and aluminium to protect US producers, risking retaliation from major trade partners such as China, Europe and neighbouring Canada, as well as helping to trigger a large sell-off on Wall Street.

Mr Trump said the duties of 25 per cent on steel and 10 per cent on aluminium would be formally announced next week although White House officials later said some details still needed to be ironed out. Mr Trump believes the tariffs will safeguard American jobs but many economists say the impact of price increases for consumers of steel and aluminium, such as the auto and oil industries, will be to destroy more jobs than they create.

The recommendation to impose tariffs was made in a report by Secretary of Commerce Wilbur Ross. Mr Trump had asked him to investigate "whether steel imports threaten to impair the national security".

News of the tariffs drove the stocks of US domestic steel and aluminium makers sharply higher, but also hit sentiment on Wall Street due to the potential impact of higher costs on consumers.

The tariff could have very different economic and political consequences, depending on which countries are ultimately affected. Though the President has often criticised China for dumping cheap metals, American restrictions on Chinese steel and aluminium mean the country actually exports little of the products to the United States currently.

Instead, the bulk of American metal imports are supplied by allies. Canada, Brazil, South Korea and Mexico were the largest suppliers of steel to the United States in 2016, while Canada, Russia and the United Arab Emirates shipped the largest share of aluminium imports.

The move came after what one person with direct knowledge of the discussions described as a night of “chaos” in the White House due to frequent switching of positions in the administration.  The threat of tariffs was sharply criticised by some senior Republican legislators, as well as industries from autos to oil whose input costs will rise. A major concern is that US farm exports could be hit hard in retaliation by steel-exporting countries.

“Every time you do this, you get a retaliation. Agriculture is the No. 1 target. I think this is terribly counterproductive for the agriculture economy,” said Senator Pat Roberts, who chairs the Chamber’s agriculture committee.

China has already threatened to curb imports of US soya beans, while the European Union has said it will consider action as well. China’s top trade official Lui He is in Washington for trade talks. The move will not directly hit China that hard, with data showing that Canada supplies 16 per cent of US demand versus China’s 2 per cent and is by far the largest steel exporter, followed by Brazil and South Korea.

“Should restrictions be imposed on Canadian steel and aluminium products, Canada will take responsive measures to defend its trade interests and workers,” Foreign Affairs Minister Chrystia Freeland said in a sharply worded statement.

Brazil’s industry ministry said it would consider taking action on its own over the tariffs or in concert with other countries. Two of its largest steelmakers, Cia Siderurgica Nacional and Usiminas sold off on the tariff news, closing down 4.4 per cent and 4.2 per cent, respectively.

Washington is already engaged in a dispute with Canada and Mexico over its proposed revision to the North American Free Trade Agreement, and months of tense talks have failed to produce any meaningful progress. Asked whether there would be exemptions for any countries, White House spokesman Sarah Sanders said she would not get into any details ahead of next week’s announcement. She said the tariffs were still being finalised. 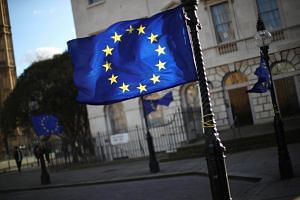 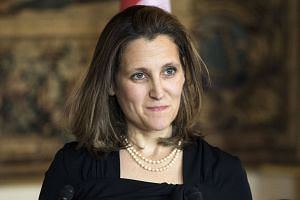 Canada says it will retaliate against US steel or aluminium tariffs

After Mr Trump’s statement, AK Steel Holding was up almost 10 per cent, US Steel Corp was up more than 5 per cent and Nucor rose 3.2 per cent. By contrast, shares of steel consumers fell, with Ford Motor down more than 3 per cent and General Motors down almost 4 per cent.

The administration says duties would protect US industry, but critics say they would raise costs for industry and fail to deliver on a campaign pledge to boost domestic jobs.

Mr Trump’s decision reflected a victory for the trade hawks in his administration, including White House trade adviser Peter Navarro, who has been rising in importance, and a setback for those who fear the repercussions of the move, such as top economic adviser Gary Cohn.

It had appeared unlikely that Trump would announce the tariffs on Thursday after a night of back and forth inside the administration.

“There was a lot of movement within the past 12, 16 hours,” said a source who had knowledge of the discussions, but who declined to be named due to the sensitivity of the issue.  “It was going to happen. It wasn’t going to happen and then it did happen.”

The administration has also cited national security interests for its action, saying the United States needs domestic supply for its tanks and warships. Contrary to the action announced by Trump on Thursday, the Department of Defence had recommended targeted steel tariffs and a delay in aluminium duties.

Although China accounts for only 2 per cent of US steel imports, its massive industry expansion has helped produce a global glut of steel that has driven down prices.

Trade tensions between the United States and China have risen since Trump took office in 2017. The administration is also pushing on what it regards as forced technology transfers to China.

While American steelmakers have lost three-quarters of their jobs between 1962 and 2005, a major study by the American Economic Association showed that much of this had been due to improved production technology as output per worker rose fivefold.

“Thus, even if trade protection leads to increased domestic production, increases in employment may be far less than many hope,” a report from the independent Econofact economist network said last week. Econofact said in its report that two million jobs were in industries that use steel “intensively”, including auto parts, household appliances, farm machinery and oil equipment.

“Across many states, the number of jobs adversely affected in these steel-using industries could far exceed any steel jobs saved,” Econofact warned.

US to impose steel, aluminium tariffs next week

The President's desire for wholesale change in US trade policy has met with increasing resistance from congressional Republicans as well as the business community, normally a reliable GOP ally.

Despite the President's claims of progress, he has little to show for some of his central promises after more than a year in the White House. Though he promised to narrow the yawning US trade deficit, it reached US$566 billion (S$748 billion) last year, a 12.1 per cent increase over 2016 and the highest mark in nine years.

The US deficit with China last year hit a record US$375 billion, the Commerce Department said last month.