UNITED NATIONS (AFP) - United States President Donald Trump on Wednesday (Sept 26) admitted his friendship with his Chinese counterpart Xi Jinping could be over as he accused Beijing of undermining his prospects in upcoming elections.

With tensions growing sharply between the two sides on a range of issues, Mr Trump said China wanted him to suffer an electoral setback as payback for his hard line over trade.

After accusing the government in Beijing of using a variety of tactics to damage his chances at the vital midterm polls in November, he said that relations with Mr Xi might have taken a permanent turn for the worse.

Mr Trump has spoken of his friendship with Mr Xi many times since coming to office, praising the Chinese leader for his role in helping bring pressure to bear on North Korea over its nuclear programme.

But asked at a press conference in New York how Mr Xi could remain his friend given the hike in tensions, Mr Trump indicated that he preferred to be respected than liked.

"He may not be a friend of mine anymore but I think he probably respects me," said the President, who said the US economy was easily weathering the impact of the trade dispute.

Washington this week enacted new tariffs against China covering another US$200 billion (S$273 billion) of its imports, shrugging off threats of counter measures from Beijing.

"We have to make it fair," he said. "A lot of money is coming into our coffers. And it's had absolutely no impact on our economy."

China has vowed to retaliate with duties on US$60 billion in US goods, but since the country only imports a total of US$130 billion, its ability to hit back with matching tariffs is limited.

The accusation of electoral interference first came during a meeting of the UN Security Council that Mr Trump chaired earlier in the day. 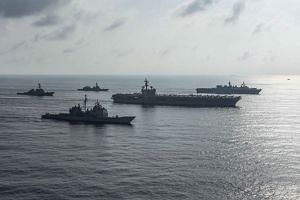 "Regrettably, we found that China has been attempting to interfere in our upcoming 2018 election coming up in November against my administration," Mr Trump told the chamber.

"They do not want me or us to win because I am the first president ever to challenge China on trade," he added.

Mr Trump later said there was clear evidence to back up his claim.

"We have evidence. It will come out. Yeah, I can't tell you now, but it came - it didn't come out of nowhere, that I can tell you," he told a press conference.

In a briefing with reporters in Washington, a senior White House official said that China was deploying economic, military and informational tools to spread influence and to undermine the US government.

"The activities have reached an unacceptable level," the official said.

The official said the policy of "actively interfering in our political system includes hurting farmers in districts and states that voted for the president".

The official was referring to China's imposition of tariffs on soybeans - a hugely important trade in the electorally crucial state of Iowa - as retaliation for Trump's tariffs on Chinese goods.

"China has all along followed the principle of non-interference," Mr Wang said in the same session that was chaired by the US President.

"We did not and will not interfere in any country's domestic affairs. We refuse to accept any unwarranted accusations against China."

But Mr Trump followed up his accusations with a series of tweets accusing China's government of paying for newspaper space in the US state of Iowa to push its message.

These "propaganda ads" are being placed "because we are beating them on Trade, opening markets", he tweeted.

The US also irked China earlier this week by going ahead with plans to sell a batch of military parts to the self-governing island of Taiwan.

Beijing sees Taiwan as part of its territory awaiting unification, and is deeply suspicious of the island's relations with the US.

A special prosecutor, Mr Robert Mueller, is investigating allegations that members of Mr Trump's inner circle colluded with Russia to secure his victory in the 2016 presidential election after US security agencies determined that Moscow had sought to influence the outcome.