A journey into the inky blackness of space has been a privilege only highly trained and qualified astronauts have been able to make since mankind first managed to escape the Earth's gravitational pull. But a fully crewed Virgin Galactic space tourism flight that took place a week ago has shattered the barrier for entry into the final frontier.

At around 8.40am on July 11, a twin-fuselage plane took off from Spaceport America in New Mexico on a historic mission.

Tucked underneath the aircraft was a rocket plane, christened the VSS Unity, with six crew members on board, including the billionaire founder of Virgin Galactic, Mr Richard Branson. While Unity has made three previous trips to space, this was the first-ever trial of the space plane with a full complement by the space tourism company, which has a goal to make such excursions off the planet available to the general public.

After the plane - christened the VMS Eve, after Mr Branson's mother - reached a launch altitude of about 14,000m, the Unity was released and ignited its own engine, sending it streaking straight upwards to a height of 86km above sea level.

At that point, the engine was shut down, allowing the passengers to experience a few minutes of microgravity before the plane re-entered the atmosphere and returned to the runway. Why it matters? The entire flight took about one hour, but the full implications of the first-ever space tourism trial are likely to manifest themselves in the years to come.

The main concern about space flight has always been safety, and Mr Branson's willingness to risk serious injury or death will go a long way towards assuaging the doubts of nervous members of the public.

The trip was not without controversy. Mr Branson's announcement of his plan to fly into space upstaged the plans of another billionaire, Amazon founder Jeff Bezos, to fly into space on New Shepard - a rocket developed by his space company Blue Origin - tomorrow.

Blue Origin had disparaged the Virgin Galactic experience by suggesting that it was not a true space flight, having not crossed the Karman Line - the boundary 100km above sea level that has been defined by an international record-keeping body for aeronautics as separating the Earth's atmosphere and space. However, all it takes to be defined as an astronaut by US space agency Nasa and the US Air Force is a flight above 80km high, which means that Mr Branson and his crew members made the cut.

All eyes are now on Mr Bezos' flight, which is set to be the first unpiloted sub-orbital flight and will have an all-civilian crew.

New Shepard will take the passengers 100km above the Earth, before they return in a capsule by parachute.

Meanwhile, yet another billionaire, SpaceX founder Elon Musk, has plans to send an all-civilian crew for a several-day orbital flight aboard its Crew Dragon capsule, though he has not set a date for a journey into space of his own.

For the time being, a flight aboard a rocket ship headed to space is out of reach for most people. A seat on Virgin Galactic's rocket plane currently costs US$250,000 (S$339,300).

That said, around 600 wealthy individuals have already signed up for a flight.

What's more, Mr Branson has indicated that his company aims to lower the price to around US$40,000 per seat once greater economies of scale have been achieved, with a large enough fleet to enable around 400 flights every year at the spaceport.

As competition escalates and costs come down, it is entirely conceivable that sub-orbital travel will become a new mode of intercontinental transportation as well.

Japan's science ministry has unveiled a plan to make this a possibility, while Mr Musk has envisioned travel to anywhere on the planet within an hour.

In any case, with the space tourism sector expected to hit US$3 billion by 2030, the market will also see other entrants in the coming decades.

Ambitious plans are already being formulated by the new-age space companies for trips to the International Space Station, building a base on the Moon and setting foot on Mars.

Where humanity might go boldly from there is anyone's guess. 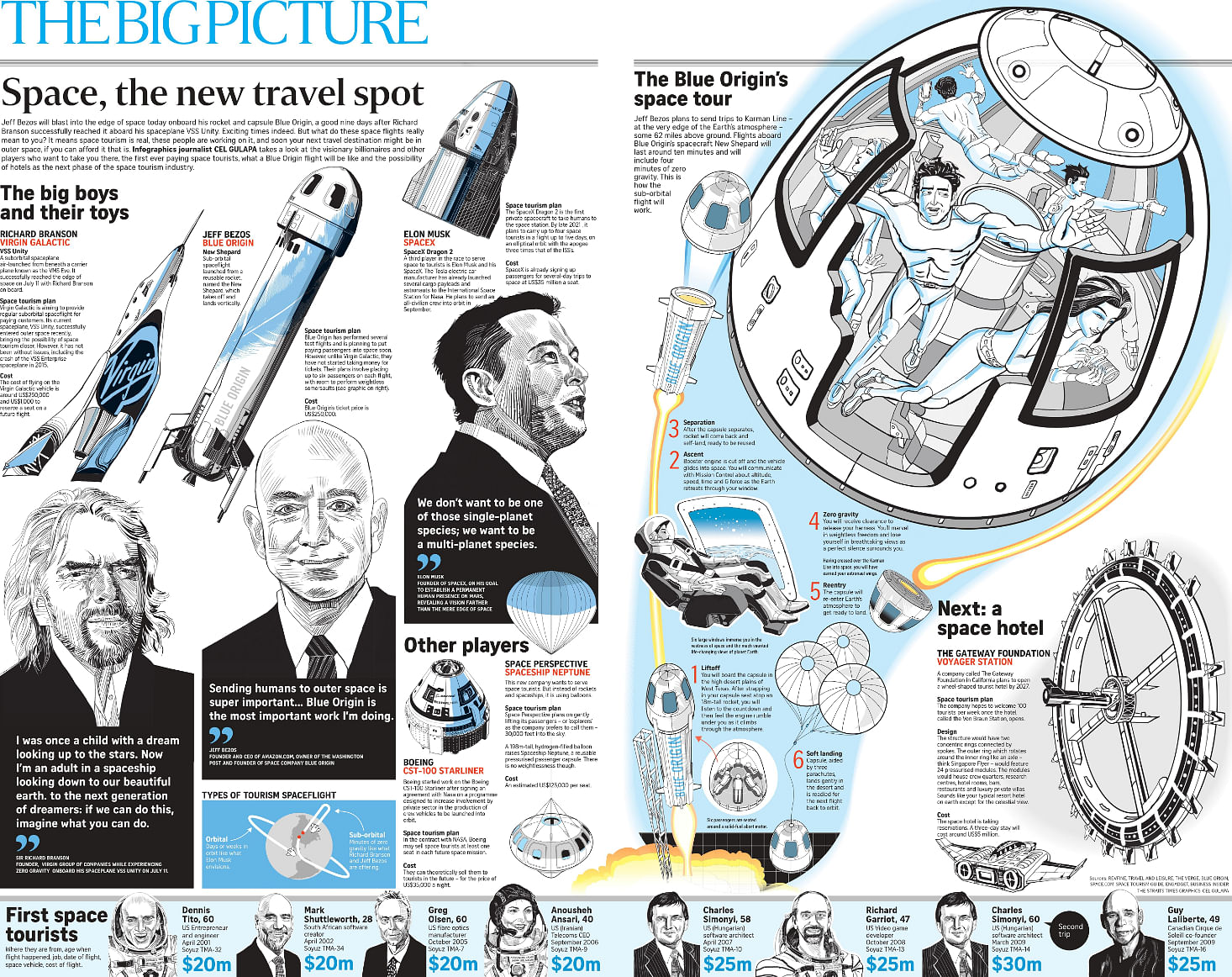