MISSISSIPPI (BLOOMBERG) - Hospitals in states where Covid-19 cases are once again surging are beginning to feel the strain in their emergency departments and intensive care units.

State health officials in Mississippi have told hospitals there to delay many elective operations beginning next week and are forming a central command to help search for intensive care unit beds.

As at Tuesday (July 27), 28 hospitals in the Gulf state did not have any ICU beds available as Covid-19 admissions tax hospitals that are already dealing with everyday emergencies such as strokes and car crashes, said Mr Jim Craig, senior deputy for the Mississippi Department of Health, in a briefing with reporters.

Hospitals in Arkansas, Florida and Louisiana are also stretched, and staff are particularly exhausted more than a year into the pandemic. Missouri hospitals have been filling up as well. The states, along with Mississippi, are all seeing the highest numbers in the United States of Covid-19 cases per 100,000 people, according to the Centres for Disease Control and Prevention (CDC).

The speed and intensity of the surge - fuelled by the highly contagious Delta variant - is showing that recent hopes that the Covid-19 crisis is coming to an end were premature.

"We are seeing a massive rise now and school's just getting started," Mississippi's state health officer Thomas Dobbs said in a call with media on Wednesday. "If you look at the trajectory of our rise, it's not a slope, it's a cliff. It's an upward cliff."

New daily hospital admissions in the US are at their highest level since late April, according to the CDC. About three-fifths of those hospitalisations are coming from the South and Central regions of the country, including states such as Texas, Louisiana, Missouri and Florida.

The seven-day average for hospital admissions of people with confirmed Covid-19 was 5,186 in the July 20-26 period, according to the CDC, a 47 per cent increase over the week prior.

Mr Dobbs said he anticipates this wave will be more challenging than others because of a staff shortage in hospitals, particularly for nurses.

"We have in many ways absolutely worn out our health professionals," he said. "There's only so much we can expect people to put up with."

In Louisiana, the state is seeing daily new Covid-19 hospitalisations reach levels it hasn't seen since March 2020, when New Orleans had what was at the time one of the fastest-growing outbreaks in the world, said Mr Joseph Kanter, the state health officer.

"The situation with the surge, it's bad, and it took a lot of people inside and outside Louisiana by surprise," Mr Kanter said in a phone interview. "It feels any bit as bad as the previous surges."

New cases and hospitalisations in the state, he said, "are going more or less straight up, and this shows no signs of slowing". The state has enough ventilators and protective equipment now, but its workforce, like Mississippi's, is burned out and not at full staffing levels, Mr Kanter said.

"Hospitals are now running up against their staffed capacity," he said. Some have started limiting elective procedures in order to free up staff and bed space. 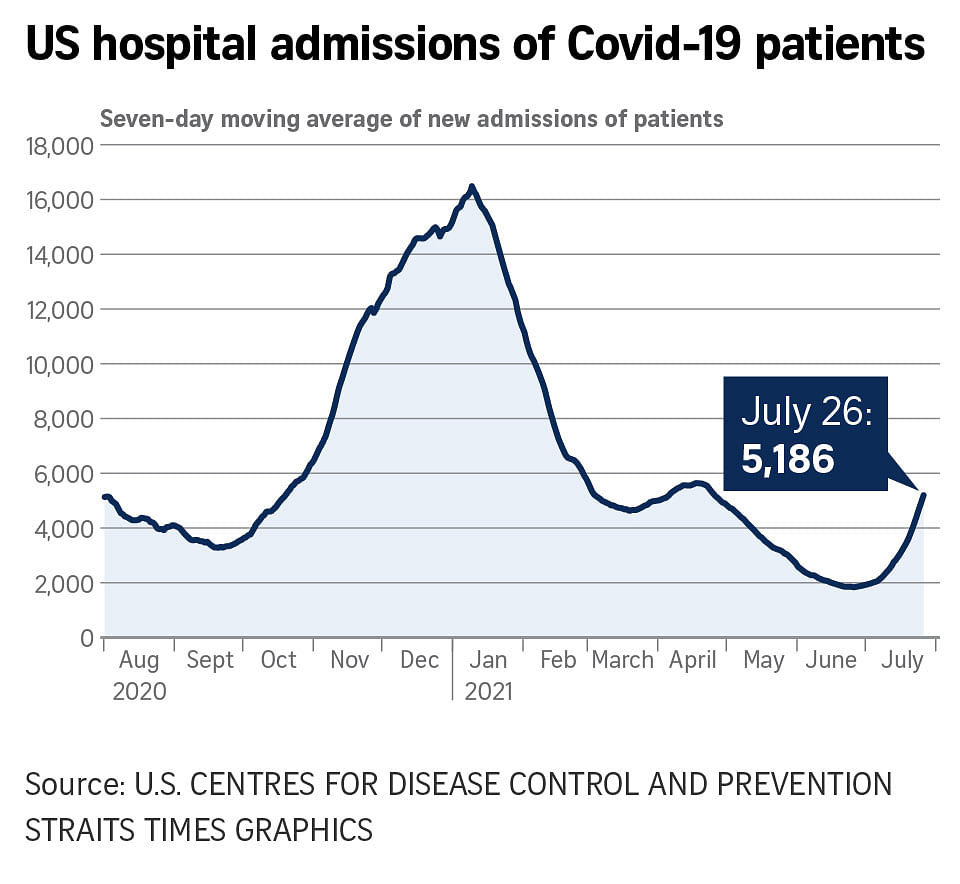 In Arkansas, state officials are discussing plans to handle the virus surge with hospital leadership, said Dr Naveen Patil, medical director for infectious diseases at the Arkansas Department of Health. About 10 to 12 per cent of the patients filling hospitals, on average, are sick with Covid-19, while the rest have other illnesses, he said.

"Hospital systems across the region are stressed," Dr Patil said. And to accommodate more patients under surge plans, "the biggest challenge would be to find enough staffing" because many healthcare providers have retired or taken a break, he said.

The Florida Hospital Association says hospitalisations totalled 8,816 as at Wednesday. That's about 87 per cent of the winter peak, but hospitalisations in Jacksonville and Orlando are higher than before.

Less than 50 per cent of people in the states where the virus is spreading most quickly are fully vaccinated, according to the Bloomberg Vaccine Tracker. However, the surge has prompted a bump in shots as well.

'Not out of the woods': US CDC issues blunt new warning on Covid-19